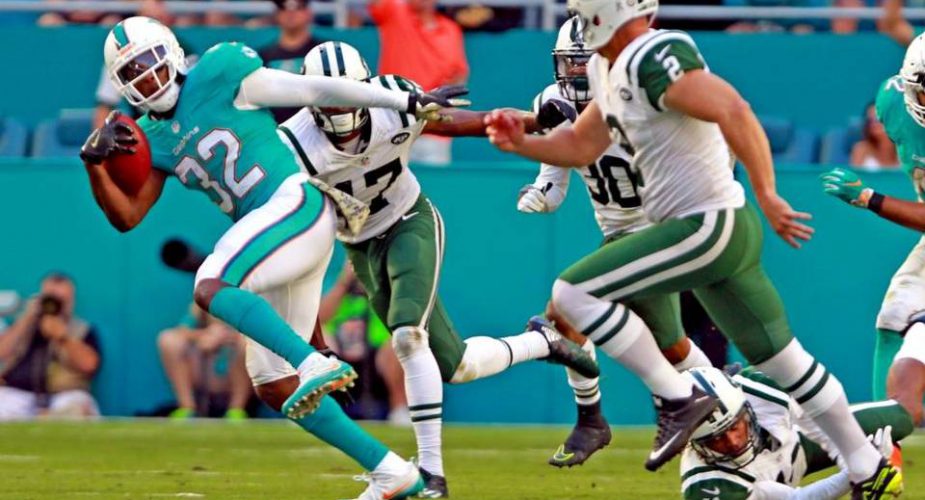 The Jets hard fought, two game winning streak came to a disappointing, frustrating end this Sunday in the form of a 27-23 loss to division rival Miami Dolphins.

The Jets lost the coin toss and Miami deferred to the second half. A long opening drive, featuring a lateral that somehow didn’t turn out disastrously, ended in a field goal for the Jets whose offense stalled in the red zone. The Jets led 3-0 with about 8:30 to go in the first quarter.

The Jets then fell behind 7-3 after handing Miami a touchdown with stupid penalties, including a taunting call on safety Calvin Pryor and unnecessary roughness on cornerback Buster Skrine. Still, on the drive after that, the Jets retook the lead on a 31 yard run by running back Matt Forte, ahead 10-7 at the end of the first with Miami driving.

Miami led 14-10 at the end of the next drive as the Jets defense allowed them right up the field early in the second quarter.  Another Jets drive then stalled in the in the red zone, forcing a field goal, and making the score at 14-13. The Jets finally forced a punt on the Dolphins next drive, and it nearly ended in disaster when wide receiver Jalin Marshall muffed it, but he recovered it on the Jets eleven yard line with 2:07 to go in the half.

The Jets, not to be outdone, also used their punter Lachlan Edwards on the ensuing possession. After offsetting penalties that forced a replay of fourth down, the Jets held Miami off the board and time wound down in the half, Miami leading 14-13.

The Dolphins and Jets swapped possessions until the middle of the third quarter, when Miami broke through with a field goal. Quarterback Ryan Fitzpatrick immediately threw an interception in Jets territory on the ensuing possession, and a few minutes later, Miami led 20-13.

The next drive saw a quarterback change for the Jets. Fitzpatrick left the game at the end of the third on a play that was that drew a roughing the passer penalty. Third string quarterback Bryce Petty came in for the rest of the drive, which stalled in the red zone, and the Jets kicked another field goal, trailing 20-16.

But the Fitzmagic continued. After the Jets defense held Miami off the scoreboard, the embattled Fitzpatrick returned to the game to lead the Jets down the field…and throw another backbreaking interception. The drive though, featured a great catch by rookie wide receiver Robby Anderson, who wide receiver Brandon Marshall insists will be a star in the league.

The Jets defense kept Miami in check again, and this time Miami muffed the punt. It was recovered by the Jets inside the 20, and after a game of frustrating field goals, the offense finally scored a touchdown with 5:42 to go in the game when Fitzpatrick hit Jalin Marshall in the end zone.

On the ensuing kickoff, safety Antonio Allen was offsides and the Jets had to kick again. The Jets special teams then allowed a 96 yard kick return for a touchdown. Trailing 27-23, the Jets offense then went three and out.

The Dolphins basically ran out the clock after that.

Despite not playing the first quarter, Sheldon Richardson led the Jets in tackles with 7. David Harris followed with 5. Linebackers Lorenzo Mauldin and Josh Martin combined for the only sack of Dolphins quarterback Ryan Tannehill. The Jets defense had no interceptions.

Kickoff next week is at 1:00 PM at Metlife against the Los Angeles Rams.

By Kristine Gammer
Posted on November 6, 2016