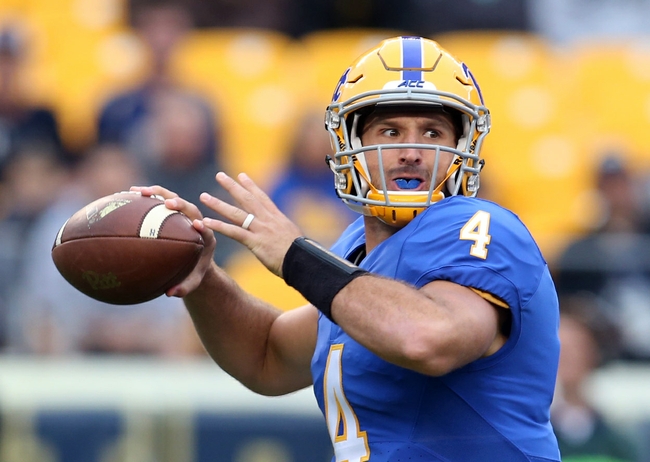 Today we take a look at University of Pittsburgh quarterback Nathan Peterman whom the Jets reportedly met with yesterday at his pro day according to Kristian Dyer of metro who addressed the Jets meeting with Peterman here.

A 6′ 2” 225 lb native of Jacksonville, Florida, Peterman transferred from Tennessee to Pitt when he was unable to unseat Joshua Dobbs from under center, seeing only spot duty in two seasons as a Volunteer.

At Pitt, Peterman was called on to run a pro-style offense that saw him play from under center (yes, some colleges still do that) where he performed at a high level.  In two full seasons at Pitt, Peterman threw 47 touchdown passes to just 15 interceptions while completing 60% of his passes.  In 26 career starts, Peterman had 14 contests in which he was interception-free, and threw more than 1 interception in a game only twice.

During his time at the Senior Bowl, Peterman caught the attention of several teams with his strong showing, leading one observer to draw a very favorable pro comparison according to MMQB:

Says one evaluator who has studied Peterman extensively: “He reminds me a lot of Kirk Cousins in this sense: He’s not going to blow you away with any of his traits, but he can do everything you need.”

Peterman’s production at Pitt is even that much more impressive when looking at the fact that he didn’t have elite talent around him, but he still managed log some impressive performances against some big-time schools.  Most notably against Clemson, when Peterman threw 5 touchdown passes without an interception en route to a 43-42 thrilling upset over the number 2 ranked Tigers.

There was also a very efficient performance against Penn State in which Peterman carved up the Nittany Lions, going 11-15 with 3 touchdowns and an interception against a team that posted an 11-3 record.

Maturity and character are two words that continually show up on multiple reports from various outlets regarding Peterman who married his long-time girlfriend at 22.

While his footwork can be sloppy at times, Peterman does like to throw the ball down the field as evidenced by his 9.3 YPC average in 2016, and has functional mobility.  Another attribute on display on watching Peterman is his willingness to hang in the pocket and take a big hit while allowing a route to develop.

Currently listed as a 3rd or 4th round prospect, the general feeling seems to be that his pro-style background will help him in transitioning to the NFL, but as is the case with most quarterbacks, he’ll need at least one season of grooming at the pro level.

With comparisons being made to Kirk Cousins and Derek Carr by NFL.com, he could be worth the wait no matter where he ends up.