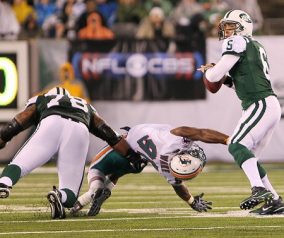 NY Jets fans have not been shy in expressing their disappointment with starting right tackle Wayne Hunter.  He is coming [...]

Wayne Hunter Admits Starting Job Is On The Line

The offensive line didn’t make a positive statement on the field in the preseason match-up against the NY Giants.  The [...]

Defensive linemen Sione Po’uha is going to miss the remainder of the preseason with a lower back problem.  Po’uha was [...]

Tony Sparano On The OLine

Tony Sparano spoke to the media today about an area that has many Jets fans concerned, the offensive line.  Here [...]

The story from training camp today was that a multiple player scuffle broke out after running back Joe McKnight threw [...]

Jeff Otah Trade is Off

The Jets trade with the Carolina Panthers for Jeff Otah is off. The deal hinged on a physical Otah had [...]

NY Jets Thoughts From The Airport

As I sit in the airport, currently delayed, on a return flight from Las Vegas to JFK I thought this [...]