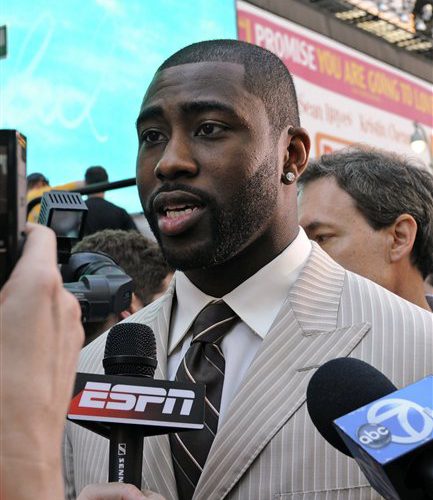 New York Jets cornerback Darrelle Revis let his frustration be known about the team’s handling of trade rumors involving the All-Pro in an interview scheduled to air tonight at 7 pm on NFL Network:

“I need answers, and I’m not getting any,” Revis said on NFL Network. “Just the fact that (those rumors were) put out there instead of contacting your best player. … If that’s how you want to do business, then that’s fine.”

Seth Walder of the New York Daily News reports Revis feeling “speechless” when hearing that he had been subject of trade conversations and conveyed that emotion via twitter upon finding out about them:

“I was speechless; I tweeted it out I was speechless. I was speechless because I didn’t get a phone call. I know it’s a business – just call me; don’t have it lingering out there. I need answers and I’m not getting any,” Revis says in the interview with Andrea Kremer. “Just the fact that that was put out there instead of contacting your best player on the team. If that’s how you want to do business, then that’s fine.”

Revis is still recovering from a torn anterior cruciate (knee) ligament (ACL) but is expected to begin “light running and condition drills” as soon as April.  Jason LaCanfora of CBSsports.com reported January 23rd that Jets owner Woody Johnson was looking at possibly trading the cornerback as Revis is set to become an unrestricted free agent after the 2013 season who cannot be tagged (restricted) by the Jets after his contract expires.

With the Jets having tight finances Johnson along with new general manager John Idzik might see no alternative but to look at trade opportunities in an effort to get something back for Revis instead of just letting him leave for another team in 2014.

Idzik did reach out via telephone on January 25th to clear the air with Revis soon after the LaConfora report:

New general manager, John Idzik, reached out on Thursday to ask him to “give us a chance” to evaluate the entire roster. Idzik told NBC’s “Pro Football Talk” on Friday that Revis “reacted well” to the phone call, which came after Idzik, Coach Rex Ryan and the owner Woody Johnson were noncommittal about Revis’s future with the team. Revis expressed his frustration on Twitter, prompting the call from Idzik.

It appears issues facing the Jets and Darrelle Revis will only grow worse as the year progresses since there is no simple solution to his current contract situation.