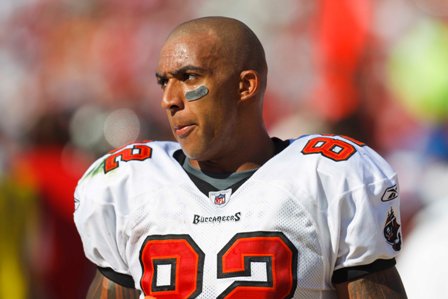 The New York Jets may be adding some much needed help to their tight end position by inviting former Cleveland Browns and Tampa Bay Buccaneers TE Kellen Winslow Jr. to a tryout during the Jets upcoming minicamp according to Adam Schefter of ESPN and Winslow’s own twitter account:

Although not officially announced by the Jets the invitation would make sense given the lack of depth at TE.

While the Jets are in need of a veteran tight end with the roster currently consisting of (2012 statistics) Jeff Cumberland (29 REC, 359 YDS), Konrad Reuland (11 REC, 83 YDS) and Hayden Smith (1 REC, 16 YDS) given Winslow’s lack of production last year along with knee problems caused by a 2005 motorcycle accident he may not be the answer for the Jets:

Winslow loves Chud (Cleveland head coach Rob Chudzinski) and the two ex-‘Canes have a great relationship dating back to their days together at the U. But Winslow, who signed with the Patriots last season, played in only one game and then asked for his release. Winslow is reportedly still suffering from tremendous pain in his knee from the 2005 motorcycle accident. It’s unknown how much more he can coax out of the knee.

JetNation will have full coverage of the first minicamp practice (June 11th) live via our twitter account (@Jetnation). A detailed analysis of Winslow along with the rest of the practice will be reported on the Jetnation.com homepage along with firsthand accounts from several Jetnation contributors during practice.