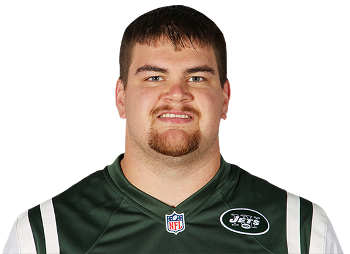 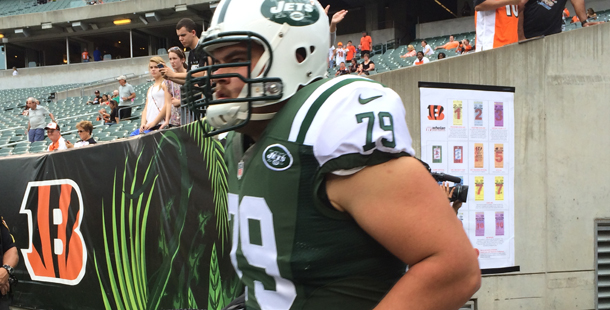 Is there a dark horse emerging in the battle for the starting right guard position during Jets mini-camp?

One name that has popped up several times during OTA’s and again during this week’s three-day mini-camp is one that is known to few Jets fans in offensive lineman Brent Qvale (pronounced Kwah-lee).

According to Eric Allen of nyjets.com, Qvale saw significant playing time at right guard during day one of mini-camp after getting a long look at the same spot during the voluntary portion of the team’s off-season program earlier this month.

Brent Qvale a 1st-year player from Nebraska, has gotten in a lot of work with 1st unit at RG today.

Qvale, a 6′ 6”/315 lb lineman who played both guard and tackle at the University of Nebraska spent last season on the Jets practice squad after getting picked following a tryout with the team.  His Nebraska bio reads as follows:

Brent Qvale was a fixture on the Nebraska offensive line for four seasons, and worked with the top unit at tackle during his final two years in the program. Qvale was one of three tackles in the regular rotation for the majority of the season, before stepping into the starting left tackle role for the final five games after widespread injuries hit the line.

The 6-7, 315-pound Qvale suffered an injury of his own against Penn State, but was able to return to start against Iowa on Senior Day. His play helped Nebraska field one of the Big Ten’s top rushing offenses again in 2013.

Qvale earned his degree in May of 2013, and played the entire season as a graduate student. He was one of 30 Huskers to earn Academic All-Big Ten honors in 2013, picking up academic all-conference honors for the third straight season.

According to PFF.com, Qvale played 91 snaps last pre-season.  In that very limited time, he was graded as an average pass-blocker and a below average run-blocker.  Neither statistic is very telling as he was going up against other back ups with limited reps, but in the case of a practice squad player there’s rarely going to be extensive information available.

However, we do know that Todd Bowles and the rest of the Jets coaching staff has been plugging him in at right guard, the only unsettled position on the offensive line where there’s no shortage of potential starters.

Last year’s starter, Willie Colon, is hoping to win his job back while youngsters Oday Aboushi, Dakota Dozier and Jarvis Harrison are among the other candidates working to earn the starting nod.

Hearing that Qvale is getting a significant number of reps given his status as an undrafted free agent versus more experienced players could amount to very little on June 9th, but it with a new regime in place it’s worth noting that in a positional battle that could include a half-dozen hopefuls, a notable number of reps are going to Qvale.

With plenty of time between now and training camp there are sure to be several players getting a shot to run with the starters, but recently it’s been Qvale which is a good sign for the Jets and their fans as it appears the new staff intends to hold true competitions across the board in 2015. A philosophical departure from the past several seasons in which many youngsters were seemingly overlooked by GM John Idzik and head coach Rex Ryan.