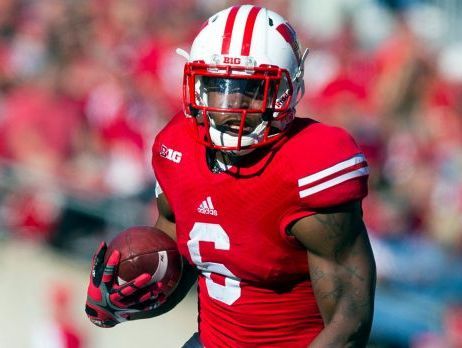 With the NFL combine under way in Indianapolis and the draft just around the corner, mock drafts will be flooding all of your favorite sports sites at an even more ridiculous rate than they have over the past few weeks.

Today, we focus on Wisconsin Badgers running back Corey Clement, a native of Glassboro, New Jersey.

In looking at Clement’s inability to stay on the field and some of the trouble he has been while off of it, it’s a wonder the Jets, a team trying to re-mold a tumultuous locker room, would even consider Clement.  Then you look at how well he has played when healthy, and it makes perfect sense.

With Matt Forte and Bilal Powell taking up the first two spots on the Jets depth chart at running back, the number three spot is up for grabs, and taking mid to late round shot on Clement may be worth it.

A stocky, powerful back who checks in at 5′ 10” 220 pounds, Clement lacks elite burst, but he runs with enough power and elusiveness that he is able to exploit any holes created by his o-line.  In four seasons at Wisconsin, Clement played in 39 games, carrying the ball 576 times for 3,093 yards, a 5.4 yards per carry average and 36 scores.

It was his senior season however, that put him on the map.  In 2016, Clement ran for 1,375 yards (4.4 YPC) and 15 touchdowns but was was never a 3-down back, which will hurt his stock.  In face, Clement managed to haul in just 29 receptions in four seasons.

As previously mentioned, Clement will have some red flags as a result of an incident that caused him to miss significant time in 2015.  An altercation in an elevator in which Clement punched another person and then (initially) lied to coaches about it will undoubtedly come up during his interview process.  According to CBS Sports, Clement and coach Paul Cryst focused heavily on changing the running back’s mindset during his senior season;

Clement also has a different outlook looking ahead to his senior season as he puts the drama of 2015 behind him. “Me and Coach (Paul) Chryst are really talking about … changing my mindset and attitude toward how I approach practice each day,”

The results suggest the attempt to mentor and grow the young man may have worked.  Whether it did or not, it was enough for the Jets to scout and interview a player who could fill a role as a goal line back early on, with the ability to become a big time contributor down the line if his focus remains on football.

To see Clement in action, click here to watch some of his best work.