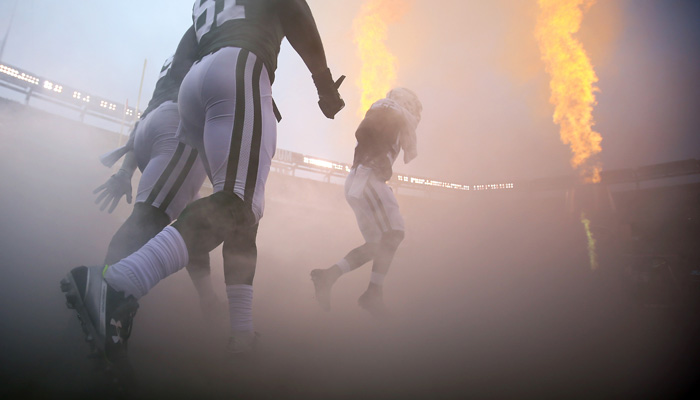 Jets are Handed a Difficult 2016 Schedule

The 2016 NFL schedule was released on Thursday, and the Jets’ schedule is a daunting one. In 2015 the Jets were given a relatively average SoS (strength of schedule) rating at .488, ranked 18th most difficult schedule in the league. This season they weren’t as lucky, getting a .531 rating, good enough to tie for the seventh most difficult schedule in the league. The SoS rating is based on all 16 opponent’s combined overall records from the previous season. The Jets will play six of their first nine games on the road. Five of their first six opponents are playoff teams from last season, the exception being the Buffalo Bills. The season will end with back-to-back short weeks and three games in the span of 13 days. The Jets will have five prime-time games for only the third time in franchise history: two Monday night games, two Thursday night games (one on Saturday), and a Sunday night game. Here’s some thoughts and predictions on each game:

With a significantly tougher schedule it’s possible the Jets could take a step back. Play makers such as Brandon Marshall, Matt Forte, and Eric Decker will keep the Jets in contention, but it might not be enough. It would be tough to say whether or not a 9-7 record will be good enough to earn a playoff berth, but in the competitive AFC conference it might be a stretch. Last season the Jets were kept out of the playoffs with a 10-6 record. At this point it’s difficult to make accurate predictions seeing as the Jets starting quarterback spot is still up in the air. The Jets’ playoff chances could vary greatly depending on who they have starting under center.

Other than the schedule release it was quiet week for the Jets. The Jets announced the signing of backup tackle Ben Ijalana who will likely retake his spot at left tackle behind newly acquired Ryan Clady. Paxton Lynch visited with the Jets during the week. Lynch is the only quarterback out of the top three in the draft that has a realistic chance of being on the board at 20 when the Jets are on the clock. There have been rumors that the Jets inquired about moving up to the #1 spot in the draft before the Rams made the move. This has fueled speculation that not only are the Jets trying to move up to draft a quarterback, but also that Muhammad Wilkerson was a part of the deal. It will be interesting to see whether or not the Jets move Muhammad Wilkerson before the draft, and if so, for what price. News broke Sunday that the Houston Texans are releasing Brian Hoyer. Hoyer was targeted by the Jets last off-season before they traded for Ryan Fitzpatrick. Hoyer could be a fallback option for the Jets, or at the very least a means to try to gain more leverage in negotiations with Fitzpatrick. According to the NFLPA the Jets have $3.8 million in cap space, enough to sign all six of their current draft picks.