ENOUGH IS ENOUGHâ€¦.ITS TIME FOR A CHANGE 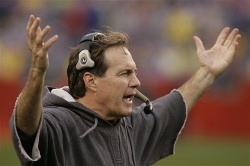 I donâ€™t know about you, but I am sick and tired of the New England Patriots. Iâ€™m tired of their holier-than-though persona, Iâ€™m tired of every New Englanderâ€™s belief that it is somehow their divine right to win a championship each and every year.Â Â Iâ€™m tired of the mediaâ€™s love affair with their playboy quarterback; Iâ€™m tired of their playboy quarterback period. Mainly though, I am tired of this preconceived media notion that for some strange reason, now that itâ€™s January, the football Gods will see to it that the big bad Patriots will saunter through the post-season like some-sort of football equivalent to Ivan Drago. Meanwhile, us Jet fans get a nice little consolation prize of being the â€œnice little story of the yearâ€? and then relegated to holding the honor of serving as ESPNâ€™s segway for next seasonâ€™s AFC east preview on â€˜who can challenge the Patâ€™s?â€?.

Maybe I sound envious or jealous, maybe I sound like an angry Jet fan taking his aggression out on a team that has accomplished a feat three times in five years that our beloved Gang Green has not been able to attain, even once, in thirty eight. Yes, maybe I am spiteful, but so what? Iâ€™m angry, and Iâ€™m ready for change.

Change, thatâ€™s the key word in this whole resurgence, thatâ€™s the key word that predicates the entire ride this team has taken us on since week ten. Lets be honest, being a Jet fan isnâ€™t easy, itâ€™s hard. In my lifetime, there has been no era of a â€œJet Dynastyâ€?, no Super Bowl appearances (yours truly wasnâ€™t around in 69â€™, but I hear it was a lot of fun), no true franchise quarterback to speak of, and certainly no signature coach since Weeb Ewbank to really call our own. No, being a Jet fan isnâ€™t easy, but thatâ€™s what makes the trip were about to take so special. We have been filled time and time again with this promise of change, notions of grandeur that have ultimately fallen short, sailed wide right (or left) or never lasted long enough to materialize. I donâ€™t know if itâ€™s the inexplicable manner in which this season has been pieced together, a manner so utterly progressive, calculated, and professional that there have been times in the past eight weeks I am not really sure I am watching the Jets that I have come to know. Maybe itâ€™s the optimism that comes from watching a rookie head coach, our rookie head coach; upstage his predecessor a mere ten weeks into his tenure. Maybe itâ€™s the utter contempt in Bill Belicheckâ€™s eyes that day as he refused eye contact with his protÃ©gÃ©. A look that made you feel he wasnâ€™t so much upset with losing the game as he was with what the future holds. I believe Bill realized then, what the world will realize Sunday. That a Head Coach/GM tandem with a combined age roughly equivalent to a typical highway speed limit has managed to dramatically shrink the landscape separating the North and South of the AFC East a whole lot faster then anyone, myself included, dreamt possible.

No, I donâ€™t have the stomach to sit here and predict this team wins three straight, against teams all with realistic championship chances, on the way to a miracle season. No, I wonâ€™t say that, not yet at least. However, I will say this; many of you may have wanted to avoid a trip north this Sunday. Maybe it would be better to take on that vulnerable Indy team which comes fully equipped with the legitimate Manning brother and their pathetic excuse for a defense. But, something tells me the â€œTanginiâ€? combo saw things differently. If this season is really about the change they have sold us to believe, then Sunday is exactly what they had in mind.

So, yes I am angry. Iâ€™m angryÂ  at the naysayerâ€™s and the folks who donâ€™t see what I see, a team who despite winning five of six en route to the playoff appearance no one dreamt possible, is still a 9 Â½ point underdog to the team that looked confused, overrated and outplayed the last time they shared a field. Maybe the media doesnâ€™t see it, maybe the odds-makers donâ€™t either, but I feel it; change.Â  I donâ€™t care what the records of the past say, this is a new era of Jet football and I for one, canâ€™t wait to see the look on Mr. Bellicheckâ€™s face when he is forced into that dreaded twenty-five yard walk to mid-field and once again, congratulate the beast he created. The oddâ€™s makers want to spot emâ€™ 9 Â½ huh? Iâ€™m not a betting man, but if I was I think I may take the advice of our boy Joe Willy and tell emâ€™ to â€œforget the points and take the odds. Weâ€™re going to win the game, Iâ€¦â€¦.â€?