The Jets Will Rise Again 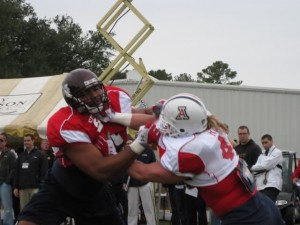 Last week, I was in Alabama watching the Senior Bowl practices. Like a glass of iced tea, syrupy sweet and brewed by the sun, this trip was the perfect refreshment to wash away the bad taste of the AFC Championship loss. While blizzards raged back home, I ate barbecue on a porch built in 1858 and realized that the Jets will rise again, my friends! The Jets will rise again!

This Jets front office historically has leaned on the Senior Bowl for talent. Talented players such as D’Brickashaw Ferguson, David Harris, and Nick Mangold were dominant as Senior Bowlers, and last year, Rex’s favorite fullback “The Terminator” John Conner showed up mid-week as an injury replacement.

As they showed on the NFL Network broadcast, going back to the early years, “Broadway” Joe Namath was a Senior Bowl participant in 1965. While the Jets do look at juniors as well (recent picks include Mark Sanchez, Darrelle Revis and Vernon Gholston) the Senior Bowl players listed below are several that fit the Jets schemes and draft needs.

Senior Bowl prospects that are highly unlikely to be on the board for the 30 pick.

This year the Jets have a first rounder at 30 overall, a third rounder at 96 and a couple of late day three picks. They do not have a lot of ammo to trade up but as always, it’s a possibility GM Mike Tannenbaum finds a way to make a deal.

LB Von Miller, Texas A&M: Miller is smart, can pass rush like a demon, cover running backs and tight ends, and in general was most likely defender at the Senior Bowl to make an impact play. He is a player with rare athletic gifts and Miller projects as a slightly undersized outside linebacker in Rex’s defense (examples from other 3-4’s include Clay Matthews or James Harrison). But Miller also fits as a strong side 4-3 SLB and this might actually be his best position. Either way he is a likely day 1 starter in any defensive scheme, and his draft stock is soaring from top 20 before the week, to borderline top 10 status after the week.

DE Cameron Jordan, California: Jordan fits the Rex Ryan 3-4 defense very well, as exactly the type of Shaun Ellis replacement they want out of this draft. Jordan had a flat out beastly week of practice. I remember B.J. Raji having a similar week several years ago, and it was that kind of elite performance that Jordan gave. Jordan can pass rush from the inside and out, he can play many positions, and had his way with very good offensive line prospects all week long. We never know what’s going to happen on draft day but barring some disaster, it’s a safe bet that Jordan becomes a top 20 selection. I don’t see how the Jets, who usually like to deal, have that kind of ammo to get Jordan. But if there is an ideal Jets draft pick in Mobile last week, Jordan might be that guy.

Senior Bowl prospects that are unlikely to be on the board for the 30 pick.

Last year we saw thousands upon thousands of mock draft projections on the Internet, none of which had Kyle Wilson lasting to the 28th pick. In that spirit, these players could be picked around 30, despite being projected higher. In other words, these are players the Jets hope fall (but probably won’t):

LB Ryan Kerrigan, Purdue: Kerrigan was outstanding in Senior Bowl practices as an edge rusher. He’s athletic and hard-working; He fits in any scheme, either as a hand-in-the-dirt weak side end in the 4-3 or a stand up outside backer in the 3-4. For these reasons and many more, Kerrigan is unlikely to be at the 30th overall pick, when the Jets pick. But he doesn’t have ideal 4-3 DE size and if enough other players get picked, he could fall through the cracks with the “tweener” label. But pending workouts, should go in the teens..

DT Christian Ballard, Iowa: Ballard was excellent in the Pit drills, where offensive and defensive linemen go one-on-one. He showed quickness and aggression against interior linemen and was also stout at point of attack in the run game. He has great hand-play and could fit several schems: Ballard projects either as a LDE in the 4-3 that plays DT on pass downs or he could be a 5-tech in Rex’s 3-4 defensive scheme. Ballard is a player I could see selected being tantalizingly close to the Jets pick, and probably is gone if the Jets win last week; as there would be a scenario where he gets all the way down the board, and then picked by either Pittsburgh and Green Bay. The Jets pick before both 3-4 needy teams so that’s one silver lining.

DT Cameron Heyward, Ohio State: To be fair, Heyward didn’t go to the Senior Bowl as he was recovering from elbow surgery but similar to Cameron Jordan, this is another ideal Jets scouting department pick. Legacy son of Iron-head, Cameron Heyward started as a freshman and dominated for 4 years at Ohio State. If he’s there at 30 it’s a slam-dunk easy pick for the Jets. But the ideal 5-tech make it to 30? Probably not but the chances are far better with him sitting out of the Senior Bowl. It should be noted that his injury was severe enough to go under the knife, but not severe enough for this tough guy to leave the Cotton Bowl game, where he gave an outstanding performance.

Senior Bowl prospects that are likely to be on the board for the 30 pick.

The draft is a funny business. If a draftnik could predict half of the draft picks in the first round every year he’d be the best draft genius up there with Mel Kiper and Rick Gosselin. It would be like hitting .500 in baseball every year. Like baseball if you predict three out of every ten picks you are pretty darn good.

With that disclaimer out of the way, I’m going to list several players for whom it is reasonable to believe they will be there at 30 overall. But just like the players above could go lower, these players could certainly higher. Projections are fun and games but most become worthless once the draft actually gets going.

LB Brooks Reed, Arizona: Reed really impressed in pass rush situations, more than many other so-called big names. He beat Derek Sherrod several times during the week, and he generally hustled his a$$ off He has an array of pass rush moves, and is never on the turf. People are calling him a 3rd rounder.but mark my words, if he has a great run at the combine, i could see him sneaking up the board. At the weigh-in he recorded 6025 257 (ideal 3-4 OLB measurements) and looked to be in great shape. Assuming Ryan Kerrigan and other pass rushers above are long gone. I could see the Jets “reaching” for this player at 30, and I could also see him being an excellent pass rusher in the league for many years.

LB Jeremy Beal, Oklahoma: Beal didn’t pass rush like a first rounder in Mobile and that is what makes him less than ideal as the Jets target. The Jets I believe are looking for a pass rusher, especially if Jason Taylor retires they are very thin at that position. But as a pass rusher, Beal was often a step short. Still, Beal did exhibit many other useful traits. Beal was relentless against the run, smart diagnosing plays and has the big game resume that most teams look for in high picks. At 268 pounds, Beal also has a physical upside that is rare to find when looking for 3-4 outside linebackers. If he runs slowly, maybe he’s more of a second or third round grade but I got to believe the Jets are looking at this player very closely.

WR Leonard Hankerson, Miami: If the Jets lose two out of the three wide receiver free agents (Brad Smith, Braylon Edwards, and Santonio Holmes), they might be in the wide receiver market again. Granted they hate to draft wide receivers high, but the last time this team drafted a first round wide receiver it was another Miami player in Santana Moss, who paid pretty good dividends (at least by draft standards where more than half the players bust). If Moss is more like Holmes, Hankerson is more like Edwards, and he played on another level last week. He was a professional receiver in Mobile, while others were still just prospects. He’s productive, has huge hands, and can use his body to muscle out defenders. In the game (and on film) he shows the knack for making tough catches in clutch situations.

Senior Bowl prospects that the Jets could take with the third round pick.

S Quentin Carter, Oklahoma, S Deandre McDaniel, Clemson, and S Ahmad Black, Florida: The biggest need on the defense besides rush linebacker is probably free safety. Unfortunately it’s not a great crop and at this time there’s no safety clearly worth the 30th pick. But there’s a nice bumper crop of depth and I believe the Jets will use this pick to sure up their defensive backfield. Carter is a fluid athlete going backward and forward and a bit of a ball-hawk. McDaniel is more of a headhunter but still has the athleticism to cover ground. Black is short but plays huge, like Colts safety Bob Sanders. Black has great instincts and knows where to be on the field during any given play. Of these three names, one or more should be there at around 100 overall, and all three can help the Jets.

CB Rashad Carmichael, Virginia Tech: If the Jets decide to move Dwight Lowery permanently to free safety, they could be in the market for a cornerback instead of a safety. If this player runs as fast as he looked last week, it’s not likely he’s around at the end of the third round. There are sources that have said he’s going to run a 4.3 second 40 yard dash, and if that happens, forget about him. However, his lack of ideal height and getting dinged up at the Senior Bowl could hinder his stock. He’s a smooth man-to-man defender that would fit perfectly in Rex’s blitz-heavy packages. He doesn’t mind being on an island. But remember even if they sign Antonio Cromartie, Rex can never have enough cornerbacks.

Senior Bowl prospects that the Jets could target as mid-to-late round picks.

These are probably later guys so I’m just gonna give em the twitter treatment:

You can discuss this and tell us what NFL Draft prospects you like in the JetNation NFL Draft forum.

Matt Bitonti is the publisher of draftdaddy.com. He loves the N.F.L. draft and will talk about it all day long if you let him.