Jane McManus from ESPN.com wrote an excellent article about NY Jets EVP Matt Higgins and his inspiration for running in the New York marathon on Sunday.

It has only been five months since 3-year-old Collette first met the gaze of her parents Michele and Matt Higgins. Before that, the autistic child sang and played, walked and spoke, but it was all seemingly apart from the world right in front of her. A chance discovery — her low cholesterol level — led to a therapy that changed everything.

It’s hard to underestimate the power of eye contact. It is how babies unlock human facial expressions, how toddlers learn to interact with other children. It forms the bond between a parent and a child.

Matt, who is a cancer survivor, has one NYC marathon already under his belt.  In 2009 he finished with a net time of 5:02:10 and will run this time to help raise money for his daughter Collette.

Matt, Michele and her sister, Megan Guinnessey, signed up to run the 2011 ING New York City Marathon on Sunday. Matt, 36, had run two years ago, after undergoing successful treatment for testicular cancer. Michele, 33, a former gymnast, began running in Princeton as Collette started a new program at the Princeton Child Development Institute an hour from their home.

“What’s great about running the marathon it brings a lot of people together to support what you’re doing,” Matt said.

The entire article is a very good read and Matt Higgins has proven himself to be one of the most open and accessible executives in the NFL today. We wish Matt, Michele and Megan well and applaud their effort and dedication.

There is a link on the ING Website if you would like to donate in the name of Collette Higgins. 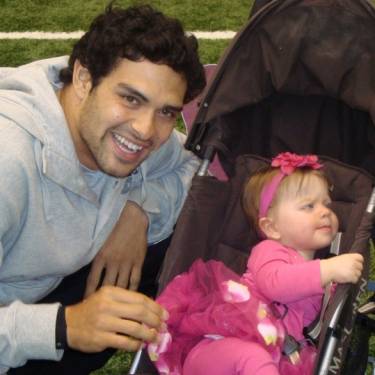