Nick Mangold is in Hawaii for the Pro Bowl and he is working with the Pro Bowl Community Blitz, presented by P&G.  Last year this was the largest community outreach in the history of the league.  JetNation had the opportunity to talk to Nick for a few minutes as they took a break on the site of their efforts, building a playground at a public school on Oahu.

JN: We know you’re doing some community service while you’re in the Hawaii for the Pro Bowl, tell us a little about the NFL Pro Bowl Community Blitz presented by P&G.

NM: Yeah we’re doing some great work here with P&G, mostly building playgrounds and things like that for kids. It’s for a great cause and it feels really good to give back to the kids.

JN: If you want to know more about this great cause go to facebook.com/takeittothehouse

JN: We’ve heard a lot about the state of the locker room, Greg McElroy and most recently Darrelle Revis has come out and said the problems “ran deep”, how bad was the locker room and was it over blown by the media?

NM: Whenever you combine losing with have that many personalities inside a locker room, there is a chance of a few problems. We’re going 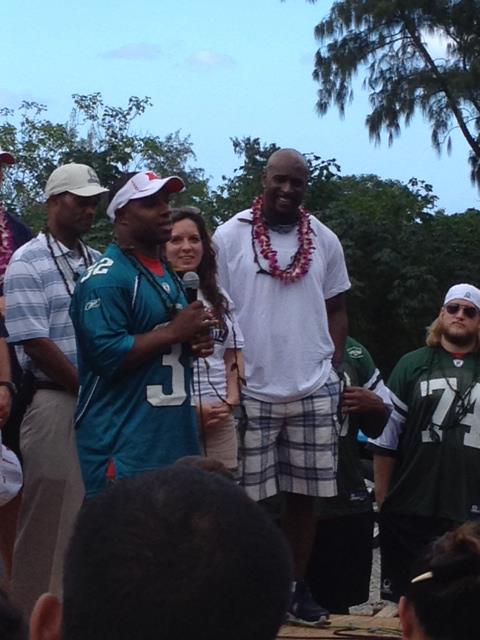 JN: The biggest issue seemed to be the relationship between Santonio Holmes and Mark Sanchez. Do you think that relationship can be fixed and do you feel that Mark is the QB of the future?

NM: Yeah. Mark is our guy. We have faith that Mark will be our QB. He and Tone are both extremely competitive, Mark is probably the most competitive guy I know, they’re both pros and we think it will work out.

JN: Ever since Rex took over, the bedrock of the Jets has been a top defense and a strong running game. The Jets finished 1st in ’09, 4th in ’10, but slipped down to 22nd this past year in total rushing Why do you think this happened?

NM: We had a lot of moving parts up front. I don’t think we had the line completely healthy and together all season. I think the lockout hurt us a little, we had some moving parts and the OTAs and mini camps would have helped us. But next year I expect us to get back to form.

JN: We all know about Rex’s bravado. This year it seemed to be more of a burden on the team, some teams even came out and said Rex gave them extra motivation. Do you think Rex needs to tone down the guarantees and bravado?

NM: Rex is gonna be Rex. We love playing for him, and this year we feel like we let him down. We don’t want to do that again.

JN: When you lose guys like Jericho Cotchery, Damien Woody, Alan Faneca, Tony Richardson, Kris Jenkins, and Shaun Ellis not only are you losing talent, but leadership as well. When I look at guys like you, D’Brick, Revis, and David Harris I see those same leadership qualities. What do you guys have to do to establish yourselves as leaders to make sure this locker room situation never happens again?

NM: I think we all need to and can step up and take on more leadership responsibilities. Next year is a new year and we’re going to fix it.

JN: Next weekend of course is the Super Bowl and it is a Jets fan’s worst nightmare in New England vs the Giants. Who do you want to win and why?

NM: Neither, I hope it ends in a tie. I probably won’t even watch it.

This Article Was Written By Nick Casale