The Jets had their first practice in pads today and that meant bad news for the offense.  Several reports said both Mark Sanchez and Tim Tebow each finished the day 1 for 7 passing.  Although it should be noted that the primary focus early in practice was on the running game. Jenny Vrentas (NJ.com) said that:

Ryan praised the work done on the ground today, by Shonn Greene, Joe McKnight and Bilal Powell. Rookie Terrance Ganaway worked at both running back and fullback. 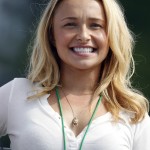 Although the biggest bright spot for the offense seemed to be Scotty McKnight and that had nothing to do with football.  His girlfriend Hayden Panettiere was in attendance at SUNY Cortland.

Darrelle Revis was limited in practice with what was described as a hamstring injury.  7th round draft pick Antonio Allen (Safety) had two interceptions in practice.  He picked off Greg McElroy and Matt Simms.

Aaron Maybin continues to impress early in camp and indications are the Jets will try to utilize him more.  Jane McManus from ESPN.com provided these thoughts on Aaron Maybin:

Aaron Maybin went so hard in pads, was looking for an IV after practice. Even went hard in interview, knocked phone out of my hand! #Penalty

Brian Costello from the NY Post noted that the Wide Receivers were leaving a lot to be desired.  On a positive note he indicated that Running Back Bilal Powell looked quick.

This was the first practice in pads and the Jets didn’t waste any time getting bloody.  Josh Baker broke his news on a special teams drill.

Visit our NY Jets photo gallery for pictures of training camp and stop by our New York Jets message board for more information on the team.