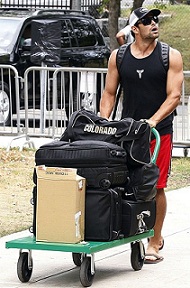 New York Jets quarterbacks Mark Sanchez spoke about Antonio Cromartie’s new role as a wide receiver.  This is a new wrinkle that the Jets have been working in this training camp.

When Mark was asked about the possibility of seeing Antonio Cromartie on offense he said, “I saw him out there, in the huddle. I thought he was messing around, so we promptly tried to remove him. Then we were told that he was a part of our team even though he was wearing that black jersey, so it was alright.”

What route did Cromartie run? “I can’t tell you everything.  That’s scheme.  Cro (Cromartie) was on an extra special top-secret route that nobody knows except for me and the rest of the offense.”

Here is some more information on the offensive package that is being put together for Cromartie from our NY Jets message board.