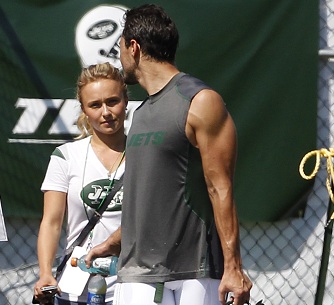 Several sources are reporting that the NY Jets have waived two players, both wide receivers, Scotty McKnight and DaMarcus Ganaway.

Ganaway was battling hamstring injury. McKnight told me few days ago his surgically repaired knee was little sore, but thought he’d be fine

McKnight (WR/5-11/182/Colorado/Coto de Caza, CA) was originally drafted in the seventh round (227th overall) by the Jets in the 2011 NFL Draft, spending training camp with the club before joining the practice squad (09/20/11). He suffered an ACL injury in practice and was placed on Practice Squad Injured Reserve (11/01/11). At Colorado, he played in 49 games, and finished first in school history with 215 receptions and 22 receiving touchdowns.

Ganaway (WR/6-2/185/Kentucky Wesleyan/Indianapolis, IN) finished his career at Kentucky Wesleyan with 214 receptions for 2,653 yards and 22 touchdowns, starting 34-of-40 games.  During his senior season in 2010, he led the team in receptions with 68 for 1,035 yards and 10 touchdowns, earning receiver-of-the-year for the Great Lakes Football Conference.  He did not play football in 2011.

The Jets are thin at wide receiver right now, so it is surprising that they would make these moves so early in camp.  There is plenty of time until the roster has to be cut down in size:

The Jets have a tremendous amount riding on the wide receivers they drafted this past April (Stephen Hill – Round Two, Jordan White – Round 7).  Pay special attention to them during the preseason games along with Chaz Schilens, Jeremy Kerley and Patrick Turner.  If the Jets offense is going to succeed this year, they need someone in that group to step up behind Santonio Holmes.