NFL To Use Replacement Referees In Regular Season 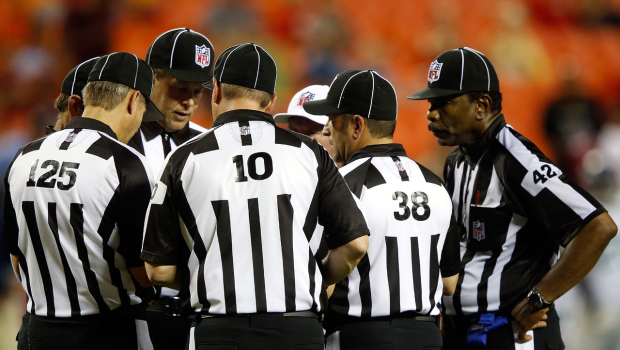 The Collective Bargaining Agreement (CBA) between the NFL and Referees’ Association expired in late May but there has been little movement on a new agreement.  The NFL “locked out” the regular officials using replacements during the preseason, a similar strategy, locking the players out, used by the NFL during negotiations with the Players Association last season before agreeing on a new CBA.

With the season opener approaching fast there was hope that pressure to come to an agreement would move the process forward but there has been no movement.  Now the NFL has informed all 32 teams that they will be using replacement referees during week one of the regular season:

With opening night only one week away, the NFL office alerted all 32 teams Wednesday that the 2012 season will begin with replacement officials in place, according to a memo obtained by NFL.com and NFL Network.

Negotiations between the league and the NFL Referees’ Association remain “deadlocked,” according to the memo sent by Ray Anderson, the NFL’s executive vice president of football operations.

If replacement referees bring down the quality of the game, what impact would that have on SB Tickets?

According to ESPN’s NFL business analyst Andrew Brandt the “deadlock” has been caused by a variety of issues:

Pension: The NFL would like to move away from the traditional pension model from the previous agreement, freezing pensions now and eventually terminating them in favor of a defined contribution model ranging between $16,000 to $23,000 per year.

Money: When talks broke off, the sides were approximately $16 million apart on a seven-year deal. This appears to be a relatively insignificant number and, as the NFLRA will emphasize, equals a cost of less than $75,000 per year per NFL team.

Reportedly, much of the divide focuses on the initial increases in NFLRA members pay. The NFL has offered increases in the 5 percent to 10 percent range, while the NFLRA is looking for closer to a 20 percent bump in pay.

Full-time: The NFL would like to start with seven full-time officials, one at each of the refereeing positions. The Refs are protective of their present full-time jobs — some are lawyers, businessmen, etc. — and would prefer two incomes. And while the NFL emphasizes this is for only seven officials, the NFLRA fears a slow creep into eventually having many full-time officials at salaries far below those of NBA and MLB full-time officials.

Pool: The NFL would like to have a pool of 21 “referees in waiting” — three full crews — beyond the existing working crews. Though the NFL touts these “extras” as building up their bench to become stronger and deeper, the NFLRA sees this group as threats to their continued livelihood and security.

The replacement officials have drawn much criticism for their lack of knowledge and ability to handle the “speed of the game” like the usual officiating crews.  In the Giants v. Patriots preseason finale the replacement refs took 10 minutes and five explanations to get a penalty call correct.

Most coaches, players and fans can tolerate this while games don’t count but it will become far more difficult if below average officiating affects the outcome of games that matter.  Player safety and health is also a concern as replacement officials, who seem to not fully understand the rules, are more likely to allow illegal plays to go un-penalized.

Hopefully the start of the season will give both sides incentive to get a new CBA done and the regular officials back on the field but even if an agreement came soon the replacement refs will still work week one.