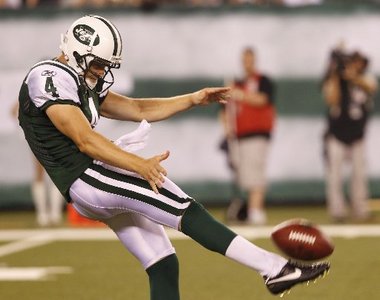 Just days from the opening game the Jets have decided to release punter T.J. Conley:

Jets cut punter T.J. Conley, according to a source.

Can confirm report from @briancoz that punter T.J. Conley has been cut. #Jets

Conley was ranked 30th in league per punt average (42.7 YRDS) in 2011.  The Jets brought in limited competition at the position this offseason and it looked as if Conley would punt for the team in 2012.

It is not clear who Conley’s replacement will be but according to Brian Costello of the New York Post former Dallas Cowboys punter Matt McBriar is the leading candidate:

I hear Jets could sign Mat McBriar as new punter but have not been able to pin down that they’ve actually signed him. #nyj

By Dennis Agapito
Posted on September 4, 2012