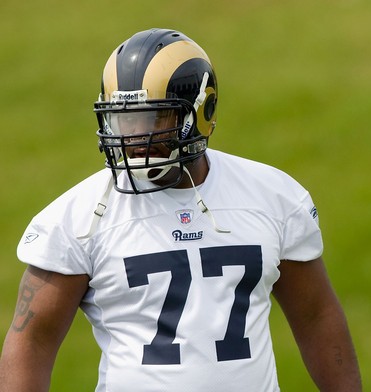 The following is an analysis of Jason Smith’s contract and the trade between the Jets and Rams:

Smith originally signed a six-year $61 million contract ($33 million guaranteed) after being drafted in 2009 which included a second year $16.3 million option bonus.  When an option bonus is exercised it is prorated, like a signing bonus, over the life of the contract, five years maximum under the current CBA (was six), so Smith’s bonus counted $3.267 million on the 2010-14 caps.  While the player receives the full bonus amount ($16.3 m) during that year for salary cap purposed it gets spread out.

A big bonus due early in the year forces the team to release a player quickly so he can become available on the open market.  An additional clause voids Smith’s 2013 contract year if he plays over 31% of the team’s offensive snaps in the 2012 season. Basically Smith, not technically, is under a one year contract, and if released or hits the playing incentive becomes a free agent who cannot be franchised.

The Jets and the Rams agreed to trade Wayne Hunter for Jason Smith but teams can only trade for a player’s future salary/bonuses any prorated money or past payment will count on the trading teams cap.  What about Tim Tebow didn’t the Jets pay the Broncos salary which was already paid?  The Jets repaid portion of Tebow’s salary advance, which was still considered future pay, even though he had received payment already,

A problem with the trade was Hunter’s salary $2.45 million guaranteed in 2012 and Smith’s $4 million with the Rams already having paid the $500,000 roster bonus a difference of $1.55 million.  To alleviate this difference Smith restructures his contract just before the trade to receive a $1.55 million signing bonus, which is paid by the Rams prorated ($775,000) on 2012/13 caps, lowering his 2012 base salary to $2.45 million that gets paid by the Jets over the season.  Now the 2012 money is equal and the Rams lose Smith’s contract and acquire Wayne Hunter’s which runs through 2014 but contains no guaranteed money after this season (‘13: $4 million, ’14: $3 million).

If the trade took place before June 1st the prorated money would have accelerated onto the Rams 2012 cap and Smith would count $11.852 million dead money in 2012 but none in 2013.  Hunter had no prorated money but was paid a $50,000 workout bonus by the Jets and will count as dead money against their 2012 cap.

The Rams acquire Hunter’s $3 million 2014 salary while the Jets lose Hunter’s salary gaining increased cap space that year but both teams can get out of either contract after the 2012 season saving the player’s entire salary under the cap.

By Dennis Agapito
Posted on September 6, 2012