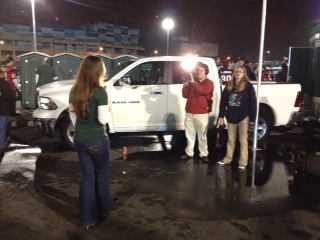 New York Jets are a passionate bunch and that passion is on display at each home game.  When close to 80,000 fans are doing the J E T S chant at the same time it is easy to see how much Jets fans love this team.  The part that you don’t get to see on TV is how passionate Jets fans are about tailgating.

JetNation.com is on a quest to bring these tailgating stories to you.  We put together a short video, which was filmed before the Jets game against the 49ers, to capture Jets fans doing what they do best; tailgating like there is no tomorrow.  In this episode our host, Courtney Aurillo, talks to Jets fans and our good friend Tailgate Joe.  With the help of her camera crew, she captures the dedication and loyalty that makes Jet Nation great.  It took us a little while to get this one uploaded, future episodes will appear in a more timely fashion.

We have more videos coming your way soon and will be filming again before the Jets \ Colts game on Sunday.  If you are a die-hard Jets fan who knows how to tailgate, we would love to hear from you.  Let us know if you would like Courtney to stop by your tailgate by posting in this thread or sending us a response on Twitter.