The Search For A Superfan 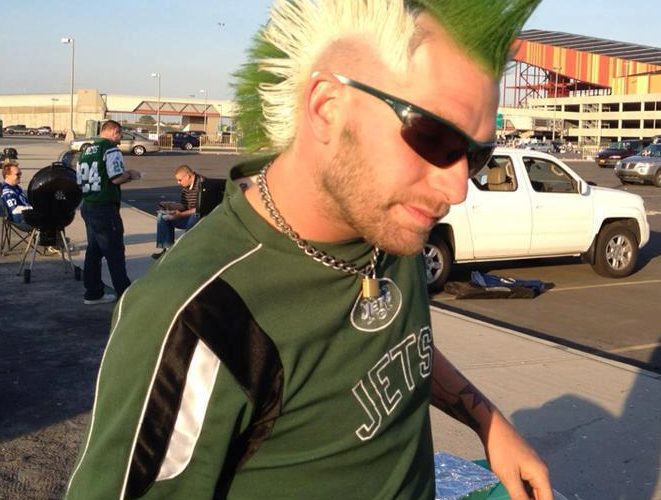 The news that Fireman Ed would be stepping down from his unelected position of “superfan” added a bit of insult to an already injurious season for Jets fans. Whether you loved or hated him, Fireman Ed was a man who inspired passion throughout the AFC East. It will be interesting to watch the fallout for the franchise: will the fans still launch into their raucous J-E-T-S chant without their director? Will the stadium be nearly as loud? Have we lost a piece of our identity as fans?

Now, there are many fervent fans that would be willing to step in and fill the vacuum created by Ed’s absence. There are several candidates right here among the Jet Nation staff. However, since all of them are currently sleeping one off in the moderator’s lounge, I had to look elsewhere. Fear not, Jets faithful: I have found a worthy candidate – one that is also known for his headgear. Well, sort of.

I recently had the opportunity to interview a superfan who goes by the nickname “Mohawk Mitch.” Here is what he had to say. 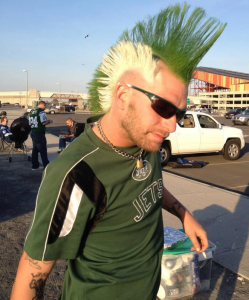 How long have you been a Jets fan?

MM: There isn’t a time in my life where I don’t remember being a Jets fan. I grew up watching the games with my father and started going to the games when I was 10, I haven’t missed a home game since.

Past or present, who is your favorite Jet?

MM: As Chris Berman would say, “Curtis, my favorite, Martin”

Take us through your pre-game rituals. How long does it take to prepare your mohawk? How do you like the tailgating experience at Met Life Stadium?

MM: Pre game rituals: I always make sure I get a good night sleep before the game, Jets football is my number one…no matter what day they are playing at MetLife Stadium. When I only had a single mohawk it was about a 10 minute process, but now that I do the 3, it takes about 20. I am prepared with not just the green hair spray, but also the blue and gold so I can coordinate if they are wearing their throwbacks. After the hair is done, I’m on the rode and I meet up with my father and we head to the stadium together, armed with mom’s chili, some beverages, and good people. Tailgating is a great time to meet up with old friends and new alike and bask in our mutual Jet fandom. There is nothing like a Jet tailgate and anyone who as accompanied me can tell you the same. After a good few hours in the parking lot, I am more than pumped to cheer on my team, no matter how difficult the opponent may be.

How did you feel when you heard the news that Fireman Ed was stepping down from his unofficial role as Jets “superfan”?

MM: I was heartbroken to hear the news about Fireman Ed. I’ve been experiencing that for the past 18 years and the stadium just isn’t going to feel the same. I understand his reasoning and I’m not upset with him. Instead of resenting him, I’m turning this into an opportunity to make some little kid maybe feel the way I did when I got to follow along in the chant for the first time.

What does the word “superfan” mean to you? Do you view yourself as the next Jets “superfan”?

MM: I’ve been the superfan in waiting for quite some time and I’m ready to take my spot! But honestly, to me, a superfan is someone who supports their team unconditionally, who can find something joyous in the game even in a loss, who always sees the light at the end of the tunnel, and will never stop wearing the colors no matter how bad a game might be. Athletes are organizations are all made up of humans looking for something or someone to believe in, I will always believe in Jet football, because even if they don’t play well, they will have still played…and I can always look forward to a game played in gang green.

Rex Ryan led the Jets to two straight AFC Championship games in his first two seasons. However, it looks like the Jets will miss the playoffs for the second straight year. Would you care to share any thoughts you might have about Rex Ryan? Is he the right man to lead the Jets?

MM: Rex is the man to lead the Jets. This year has been laden in injuries and he can’t be held accountable for things that are caused by actions ON the field. He has done so much for the franchise and I believe he will live up to all the words he has spoken. He’s done things for this organization done before and I think there are still more great things to be seen from him.

What do you think the franchise must do to have a more successful campaign in 2013-2014?

MM: Success next year is a loaded question that could be discussed for hours. Personally, I think being healthy is going to be key.

Is there anything else that you would like Jets fans to know about you?

MM: [I am campaigning] NOT to replace Fireman Ed, but to give hope and leadership back into Jet Nation. I looked to him for years to get the crowd going and I want to keep them going for all the years that I can. I believe in our team and I want the fans to believe in me. This is about heart pumping passion for the sport and my heart pumps green. I will always stand tall for this team no matter what the situation and I will always be ready to fly.

Thanks for your time, Mohawk Mitch. If you would like to learn more about Mohawk Mitch, and/or get a look at his killer mohawk, you can visit his fan page on facebook here.