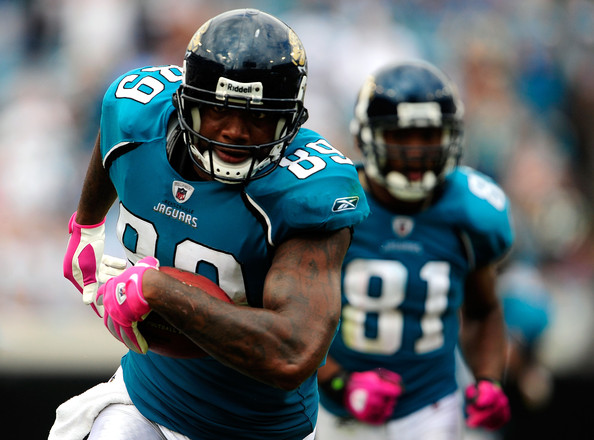 The Jets are set to take on the Jaguars and here are some players to watch:

1.  #15 WR Justin Blackmon– Blackmon has had an up and down rookie year.  He has 39 catches for 557 yards and 3 touchdowns.  His biggest issue so far this year is his route running.  He tends to break off routes early, which has resulted in more interceptions and incompletions for the QBs.  He is a weapon none-the-less.  His speed, size and natural ability could make Blackmon a dangerous opponent for the Jets defense this game.  With Cecil Short out of the game, Blackmon will be a go-to-guy for Chad Henne, which means he’ll be covered by Antonio Cromartie who has had an excellent season thus far taking over the role of “shut down corner” when Darrelle Revis went down for the season.  This will be a must-watch matchup.

2.  #89 TE Marcedes Lewis–  Lewis has been a safety blanket for Jaguars QBs all season long.  He has 37 catches for 398 yards and 4 touchdowns.  He is a large, physical tight end with above average speed.  LaRon Landry and Yeremiah Bell will most likely split the duties of covering Lewis on obvious passing downs and in goal line situations, where Lewis is the favorite target of Henne.  He is the major target for Henne on 3rd down and if the Jets can manage to take him out of the equation, it could be a long day for the Jaguars offense.

3.  #58 Jason Babin and #94 Jeremy Mincey– Both players will anchor the defensive line today for the Jaguars.  Mincey has only 2 sacks, but with Babin now on board, he could start to quickly rack up sack numbers.  Babin is a proven pass rusher and the Jets will have to make sure they know where he is lined up at all times.  The offensive line has to communicate well in order to stop these two from getting to Mark Sanchez.  Sanchez has been looking more at his protection than the routes run lately, which is a sign of lack of trust in his offensive line.  Although Austin Howard has played well, Babin may cause havoc going one-on-one against him in today’s matchup.  The added atttention to Babin will allow Mincey to face a lot of one-on-one situations which could result in more pressure on Sanchez.

*All stats courtesy of NFL.com.