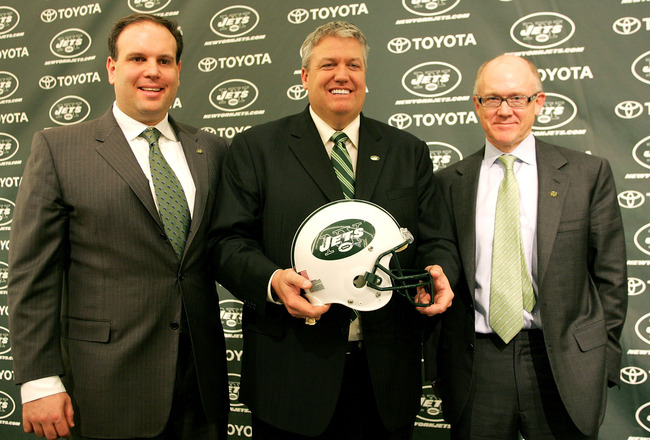 With the closing of the 2012 season and “Black Monday” upon us the fate of two of the Jets highest profile personnel has been determined.  According to a statement released by Jets from owner Woody Johnson general manager Mike Tannenbaum will be relieved of his position with the organization while head coach Rex Ryan will remain to see if he can return the Jets to playoff contention after a disappointing 6-10 record this season:

I (Woody Johnson) informed Mike Tannenbaum that he will not return for the 2013 season.

Rex Ryan will remain the Head Coach of our football team. I believe that he has the passion, the talent, and the drive to successfully lead our team.

Tannenbaum has been under much scrutiny most of the year often criticized for poor drafting and contract management which has led to an overall drop in talent.

Tannenbaum’s decision to unnecessarily extend Mark Sanchez’s contract was an expensive error. Not kept on as cap guy. #NFL #Jets

Coach Ryan had success in his first two seasons (2009-10) making the playoffs but seemed to stubbornly go down with a regressing Mark Sanchez as his starting quarterback for most of 2012.

The Jets will be holding a press conference, time to be announced, later to discuss changes but have canceled a previously scheduled 4:45pm meeting with coach Ryan:

Jets to have a coaches staff meeting at 1pm:

#Jets coaches have a staff meeting at 1 p.m. where they will find out more about their future. Guess we’ll find out soon after #BLACKMONDAY