The Scandal That Isn’t: Tattoogate 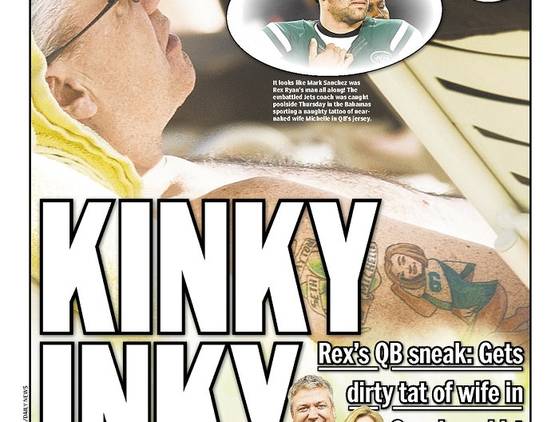 For any member of Jet Nation not paying attention these past two days, Rex Ryan has a tattoo. Of his wife. In a (presumably) Mark Sanchez jersey (and not, say, a Ray Lucas jersey).

This was discovered when, after the Jets failed to host a press conference within the acceptable amount of time after the final game of the regular season, Rex Ryan took a vacation to the Bahamas with his wife and the New York Daily News had someone take paparazzi-like photos of him with his shirt off.

As mentioned, the “story” was “broken” by the Daily News, which had three articles on it, including one by Gary Myers that seemed to be seriously analyzing whether or not the tattoo was going to adversely affect the Jets locker room. Yes, really. That this is even an issue says more about the Daily News than it does about Rex Ryan, and hopefully Rex will come away from this more fully aware that newspapers are not really on his side.

But for now, here we are.

No matter what anyone says, there’s no correlation between Ryan’s ink and his leadership ability. The New York Post reported today that the tattoo, which some thought might be Ryan pranking us all, is real and he’s had it since the end of the 2010 season. Further, the coaches and even some players knew about it. Nobody thought it was a big deal, and think it’s funny a tattoo has caused so much uproar.

Rex Ryan’s poor choice in jersey numbers (or maybe his wife’s, if she picked it out) is not an indication of why the team isn’t united enough, or performed poorly, or whatever other charges you want to level at them. Former Eagles’ head coach Andy Reid’s son was found dead of a heroin overdose in the dorms the team was using during training camp this past year.  Did we hear anybody saying things like, “If Reid can’t control his son, how can he control a football team?” No, because it’s a stupid leap to make. A tattoo is far more trivial.

The Jets have brought a lot of this unwanted, everything’s-blown-out-of-proportion attention on themselves the last few years. It’s not just the press conference. It’s the talking, the guarantees, being a bit too open with the press, never taking the final step, Tim Tebow, standing by motionlessly as Mark Sanchez became a shell of even his former, mediocre self – it’s all created an environment where everything is happening under a microscope.

Rex Ryan deserves a ton of football criticism for the way the Jets were handled this year, particularly the offense, which was an unmitigated disaster. Mike Tannenbaum being fired and not demoted was a miracle. Why offensive coordinator Tony Sparano hasn’t been fired yet is a mystery.

But really? Full stories analyzing Rex’s tattoo because the team skipped a press conference and rescheduled it a week later? Stalking him (and his wife, no less) to the Bahamas? Is Rex Ryan really so interesting we need pictures of him with his shirt off? The answer is no.

If we’re guessing, the press conference was probably postponed because Ryan’s job is in limbo depending on the new GM hire (which is close to officially being Tom Gamble, from news that’s breaking today). Plus, the Jets probably figured they’d have hired someone new by the time the presser took place (which looks to be true at this moment) to talk about the future of the team.

Finally, Rex Ryan having a tattoo of his wife – and that’s what this is, a tattoo of his WIFE, no matter what she’s wearing – isn’t a scandal. In fact, it’s really none of our business. That Rex is still so in love with his wife after 25 years of marriage he’d get her tattooed on his arm is something to be applauded, not criticized, especially during an era where there’s no end to the bad behavior athletes and coaches engage in. Mike Price’s story is my favorite in recent memory.

One poster said to me in the JetNation forums, “The media didn’t make Rex a clown. Rex made Rex a clown.” It’s true that Rex being perceived (at the very least) as a clown is Rex’s fault. But being in love with his wife is not what makes him one.

By Kristine Gammer
Posted on January 6, 2013