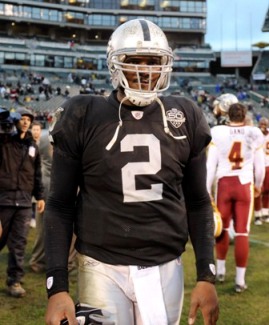 According to reports the New York Jets have been exploring the possibility of bringing in former Oakland Raiders quarterback JaMarcus Russell.

Russell was the number 1 overall pick of the Raiders in 2007 and became the poster boy for the more stringent rookie wage system in the new NFL Collective Bargaining Agreement.  After holding-out into his rookie season Russell eventually signed a $61 million deal with Oakland, going 7-18 as a starter, with 18 touchdowns, 23 interceptions, a completion percentage of 52 and quarterback rating of 65 during 3 seasons with the team.

Always seeming to be out of shape and overweight Russell was released by the Raiders in May 2010 then arrested in July of that year for possession of a controlled substance.  He was contemplating a return to the Louisiana Swashbucklers of the Professional Indoor Football League in December 2011 since he played collegiately at Louisiana State University but never signed with the club.

Currently weighing over 300 pounds and not having played professionally since 2009 Russell would be a long shot at making an NFL comeback but the “look under any rock” philosophy apparently still applies to the Jets even with the departure of Mike Tannenbaum.

UPDATE: ProFootballTalk”s Mike Florio is reporting the Jets are not interested in JaMarcus Russell:

I’m told the Jets have no interest in JaMarcus Russell.Story coming at PFT.