“Jets West”: What to Expect from the Jets New Offense 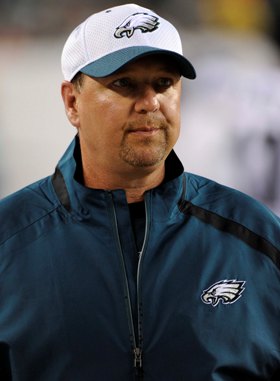 The Jets have had a “ground and pound” philosophy for the past four years.  Aside from success in the 2009-10 playoffs, the Jets haven’t been able to establish a solid run offense the past two seasons.  Now the organization is turning to new offensive coordinator Marty Mornhinweg’s “West Coast Offense.”  He’s coming to the Jets after 7 years as the Philadelphia Eagles offensive coordinator (10 years in Philadelphia total).

There’s been much written explaining what the philosophy of the offense is and how it works but one can easily get lost in the technical aspects of Mornhinweg’s system.  This article will tell all you need to know about the offense in simple terms and how the Jets will use the system in 2013.

The West Coast Offense originated with former San Francisco 49’ers Head Coach Bill Walsh.  Most don’t know that the offense didn’t originate when he was in San Francisco, but the philosophy started when he was the offensive coordinator in Cincinnati.  He took his offense to San Francisco where he ran it with Hall of Fame quarterbacks Joe Montana and Steve Young.

The basic philosophy is to supplement running the ball with short quick passes putting the offense in 2nd or 3rd and short situations.  The goal is to take what the defense gives you and be patient with the short passes, which will set up potential big plays a few times per game.  This offense attempts to exploit linebackers in pass coverage as they’re usually weaker in that aspect of the game.  The constant threat of passing will keep a defense honest, and force them to cover more and blitz less.  Through pre-snap motion and a wide variety of formations, it attempts to flood (overload) the defenses zones by sending receivers into areas where the defense doesn’t have enough players to defend every route.

The offensive philosophy for each position is:

Quarterback– The quarterback must be a playmaker.  You cannot have a “game manager” as the quarterback of the West Coast Offense.  The QB must be able to read the defense both pre-snap and after snap and make quick decisions.  He also must be able to go through his progression of receivers quickly and make quick accurate decisions.  A lot of routes are timing routes so the QB must be on the same page with the wide receivers at all times.  The key for the QB of this type of offense is to take what the defense gives you and be patient.  Many guys try to force throws that aren’t there or force a deep ball instead of taking the short passes (i.e. Michael Vick).  Additionally, the QB must be mobile and be able to extend the play.  This offense doesn’t use a tradition pocket passing game, but rather rolls the QB out of the pocket to make precise hard thrown passes within 10-15 yards of the line of scrimmage.

Running Back– Running Backs in this offense must be great route runners and pass catchers.  They are often used to exploit mismatches on linebackers, so they must have great hands and be agile in space.  When asked to run the ball, they must have excellent vision and be able to anticipate and find a hole amidst a zone blocking scheme by the offensive line.  Shifty, strong running backs suit the offense well.

Tight End– Tight Ends have to be excellent blockers, as well as, good possession receivers.  They need to be able to get open in the middle of the field and catch passes in tight windows.  Most importantly, the QB must be able to trust his TE and feel comfortable throwing to him.  Brent Celek of the Philadelphia Eagles has made a career of being that trustworthy, 3rd down receiver in this type of offense.  A large, athletic TE with great hands and route running ability is a must.

Offensive Line– The West Coast philosophies implement zone blocking schemes for the offensive line.  On run plays, the line works as one solid unit to block in a zone to create holes.  They are sometimes used to pull and lead the way, but most times they will zone block.  Linemen in this offense must be quick and agile.  Their pass blocking will be quick, explosive blocks because of the short routes being run.  This means that the linemen must all be on the same page at all times, led by their center yelling out directions.

Wide Receivers– Wide Receivers must be able to get open in small spaces.  They must be precise route runners with the ability to run after the catch.  DeSean Jackson has become a threat in the NFL because of this.  In general, the receivers must properly time every route and be on the same page as the quarterback on all throws.  They also don’t necessarily need great straight-line speed but rather be able to change direction quickly and move in tight spaces.  They have to develop a relationship with the QB where the QB will always know where they will be on each play.  Communication is a necessity.

That’s a quick, short and simple wrap up of each position in the West Coast Offense, but most people are wondering, how will this fit the Jets roster?  Well, there are going to have to be changes in order to be successful in this offense.  The QB position will need an upgrade as Mark Sanchez has struggled with reading defenses and making quick decisions in his career.  He also is tempted by the deep throw which results in interceptions and in this offense the QB must be patient and disciplined.  He also isn’t as mobile as scouts thought he could be which may hinder his ability to run this offense.

Current free agent running back Shonn Greene has struggled in the passing game throughout his career.  He isn’t a shifty back which makes it difficult for him to get space from defenders.  We haven’t seen enough from Bilal Powell or Joe McKnight to say that they would fit this role, but maybe one of them has the capabilities to do so.  If the Jets feel that they do not, they may look to draft a RB in the 2nd or 3rd round, as this draft has many talented, well-rounded backs available.

The Jets need a big athletic tight end with reliable hands.  Hayden Smith would have to improve drastically in his blocking in order to make the team and have a role this upcoming season.  Dustin Keller’s hybrid TE build doesn’t suit this offense and he’s an unrestricted free agent whom the Jets may not pursue resigning.  They need to draft a big tight end with speed who can get into and out of routes smoothly and catch passes in tight windows.  The prototypical West Coast tight end is not on the Jets roster currently.

The offensive line has a true leader at center in Nick Mangold who will control and call all the line’s blocking schemes.  Tackles D’Brickashaw Ferguson and (restricted free agent) Austin Howard could get the job done on the outside if they can manage to stand their ground and protect for quick three step and five step drops.  Offensive guard is a cause for concern.  The Jets need two athletic guards who can protect and be able to zone block on guys like New England Patriots nose tackle Vince Wilfork.  The draft may be a place they turn to fill this position.

Wide receivers Santonio Holmes and Jeremy Kerley can flourish in this offensive scheme.  They have the ability to separate and run after the catch to make big plays. Second year wide-out Stephen Hill will likely run the deeper routes, while other receivers flood the defensive zone, making him the big play guy once or twice a game.  Hill’s route running needs improvement over the middle but if he can do this, he will be a major asset to this passing game.

In summation, the Jets do not have the perfect personnel for the West Coast Offense, but they have pieces that could provide a major impact.  They have guys who can play huge roles and make a name for themselves in positions that are heavily relied on in Mornhinweg’s offense.  The biggest additions the Jets need to make are a mobile, smart, fast reacting QB with a strong arm, a big blocking and reliable catching tight end, and offensive line speed and quickness, especially at the guard position.

The Jets offense is far from complete and through the draft and veteran minimum free agents, the team will try to put together the best arsenal to help Mornhinweg succeed.  He has had 10-top-10 offenses through the course of his coaching career.  This year the Jets will have to build a solid core which suits the offense best, and while it will take some time, this offense can be successful with the proper pieces in place.