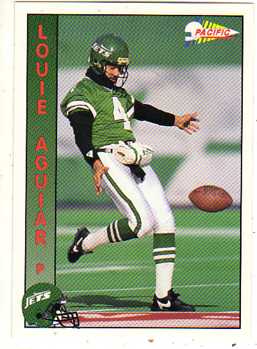 The New York Jets announced several coaching changes today.  Most notable will be the changes on the offensive line.  As Mike Devlin steps up to replace Dave DeGuglielmo who will not be returning.  Those of you that were fans during the Bruce Coslet days will be excited to see the name Louie Aguiar on this list.  He is the Jets new assistant special teams coach and was a fun player to watch during some tough seasons.  He was a punter and also handled kickoffs but was used on several fake punts; it will be interesting to see if he brings any of that creativity back with him.

Here is the official release from the Jets:

Aguiar (Utah State/Livermore, CA) begins his NFL coaching career after previously overseeing the Aguiar Kicking Academy that holds a pro/free agent camp for draft eligible and free agent athletes every spring. Entering the NFL in 1991, Aguiar spent time with the Jets (1991-93), Kansas City (1994-98), Green Bay (1999) and Chicago (2000). He played in 152 games and recorded a gross average of 41.2 yards on 758 punts. He was named a second-team all-pro in 1995.

Heller (Penn State/Miami, FL) joins the Jets after spending the previous season as the offensive line coach for the Omaha Nighthawks of the UFL. Beginning his coaching career in 2004, Heller has coached in NFL Europe (Amsterdam Admirals), the CFL (Toronto Argonauts), the NFL (Jacksonville Jaguars) and the UFL (Omaha). Initially a fourth-round pick of the Buccaneers in 1984, he played 12 seasons in the NFL with Tampa Bay, Philadelphia and Miami.