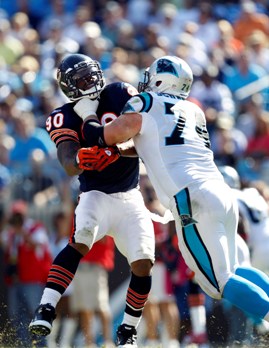 The New York Jets offensive line might be going through a transition next season as both guards Matt Slauson and Brandon Moore are set to become unrestricted free agents.  2010 round two draft pick Vladimir Ducasse was being groomed to replace Slauson playing part-time at left guard in 2012.  Moore will be 33 going into next season but has been a solid player who seems to have some productive years left.   With the Jets having tight finances they may not be able to retain Moore as he would be an attractive option for a team in need of a veteran lineman.

Big name high priced free agent guards like Andy Levitre or Louis Vasquez will be out of reach for the cash strapped Jets so they’ll need to look at cheaper alternatives.  Former Carolina Panthers and Minnesota Vikings offensive lineman Geoff Schwartz is set to become a free agent.

During 2010 Schwartz started all 16 games for the Panthers 5 at right tackle and 11 at right guard.  Unfortunately a hip injury sidelined him for the entire 2011 season.  Signed to a one year deal in 2012 with the Minnesota Vikings Schwartz was hit with another injury this time a sports hernia which cost him the early portion of the season.

Second year lineman Brandon Fusco emerged as the Vikings starting right guard since it took time for Schwartz to return from his injury but even though Fusco was starting Schwartz began to take on a larger role later in the year.  There were even games when Schwartz played more than the starter Fusco.

Just like the Jets did last season with safety LaRon Landry they could give Schwartz a reasonable one year “show me” deal.  Before coming to the Jets Landry’s past few seasons were marred with injury making him a risky signing but ended up playing in all 16 games while being named to the Pro-Bowl.

Schwartz will be 27 by the start of the 2013 season and can played tackle or guard on the right side of the line.  He’d be eager to show his 2010 form on a one year deal opening up the possibility for a future longer term contract as Landry is doing now.

There is always a risk in signing a player who had some injury problems but even obtaining health players isn’t risk free.  The Jets will be looking for “diamonds in the rough” hoping to get great production at a bargain price just like what happen with Landry.  While Schwartz does come with health concerns he has the ability and experience to be a very good addition at a position of need, so if the price is right the Jets would be wise to give Schwartz an opportunity this season.