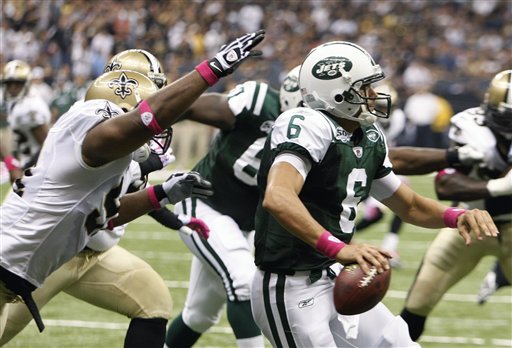 There appears to be much confusion over Jets quarterback Mark Sanchez’s current contract and what would occur if he agreed to restructure.  As recently reported on JetNation there is conflicting information to whether or not the Jets have even approached Sanchez about a restructure but this article will attempt to explain what will and won’t occur if a restructuring takes place.

In March 2012 the Jets gave Mark Sanchez a new contract as his original rookie deal was set to expire after the 2013 season.  Many people have been mislead by media reports as well as the timing of the new deal that it was given to Sanchez as “make-up” money for the Jets inquiring about Peyton Manning.

This is 100 percent without a doubt not the reason why the Jets gave Sanchez a new contract.  The new contract was given to provide needed salary cap relief for the 2012 season, no other reason applies, as Sanchez did not earn nor deserve the new deal he got.  Simply put the cash strapped Jets lost on a risky financial gamble which is stifling them under this year’s salary cap.

Sanchez and the Jets came to terms on a deal extending through the 2016 season and included some salary changes from his old contract for 2012 and 13.  Under his old contract Sanchez was to count $14.25 million on the 2012 cap but after the new contract Sanchez cost $14.25 million on the 2012 cap.  What about the 2012 salary cap relief?  We’ll explain how that occurred a little later.  The Jets raised Sanchez’s 2013 salary by $2.75 million and guaranteed his base salary of $8.25 million.  There is no other guaranteed money owed to Sanchez after the 2013 season, so even though there are actual salary numbers in 2014-16 we’ll concentrate on 2012-13.

The Jets converted $8 million of Sanchez’s 2012 base salary into signing bonus, by doing this they were able to prorate (spread) that money out evenly over the life of the contract now 5 years.  The $8 million bonus was paid in full to Sanchez early instead of throughout the season but $1.6 million was prorated or added to the 2012-16 caps.  This allowed the Jets additional 2012 salary cap space as you reduce Sanchez’s base salary number by $8 million but add $1.6 million of the proration onto the 2012 cap leaving a savings of $6.4 million that year.

If Sanchez agrees to restructure his contract this year he will not give up any of the $8.25 million guaranteed salary nor will the Jets give Sanchez any more guaranteed money.  A restructure would take a portion of Sanchez base salary, for this example we’ll use $7 million, converting it into signing bonus and prorating it over 4 years 2013-16.  This would push $1.75 million of prorated money into 2013, 14, 15 and 16 caps, total of $5.25 million in savings.  The new prorated money would get added to the prorated money from 2012 increasing the total prorated bonus cap charge to $5.85 million in 2013, Sanchez has an additional $2.5 million from a prorated 2010 salary advance included in this year, $3.35 million in 2014-16.

Sanchez would still get his $8.25 million this year but $7 million of it once he signs the restructured contract than $1.25 million throughout the season, he’s not losing money.  The Jets get savings now but the prorated money would accelerate, all be added together onto next year’s cap or possible over two years, if Sanchez got released after the 2013 season causing a huge “dead money’ cap charge, money which counts on the cap for a player no longer there.  If this restructure example occurred the Jets would save now but likely pay later.

Most players will agree to such a restructure since they are not financially hurt, in fact they usually like getting a big check early, but players consult their agents about any contract change.  So why wouldn’t Sanchez agree to this if the Jets ask him to?

By changing the contract in the manner described above Sanchez would have a 2013 base salary of $1.25 million.  Now if a team wanted to trade for Sanchez they would be acquiring that guaranteed salary only for 2013 with no other guaranteed monies left in his current contract.  Any prorated money, already paid by the Jets, stays with them and they have to deal with whatever the cap charges would be depending upon the timing of a trade.

Leaving his contract as is basically allows Sanchez to have a no-trade clause without having one, (Editor’s Note: not completely sure Sanchez’s contract is void of a no-trade clause but reports the Jets were looking to trade him suggest there is not one).  So if Sanchez lowers his base salary to provide salary cap space he might find himself traded somewhere he doesn’t want to go.  This among other things might deter Sanchez from agreeing to any contract changes.

It seems unlikely that Sanchez’s contract will be restructured and he’ll play out 2013 under his current terms then be evaluated from there.  The Jets made a decision to give out this contract they will probably just have to live with the current financial consequences.