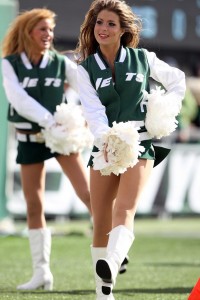 Do you have what it takes to be a New York Jets cheerleader?  Here is your chance, the Jets are holding tryouts!  Good luck and if you are trying out please stop by our New York Jets message board and let us know.

“The Flight Crew cheerleaders play an integral part in elevating the fan experience on gameday,” said Flight Crew Director Denise Garvey.  “We have grown immensely over the last six years and are not only entertaining those at the stadium, but we are sharing our Flight Crew spirit with fans at events and appearances throughout the Tri-State area.”

As in years past, “early bird” registration is available.  The timeline and fees are as follows:

“This is an unforgettable experience for young women wanting to represent a National Football League team in one of the most unique markets,” Garvey added.  “We’re looking for talented women who are eager to experience what it’s like to perform in front of 80,000 fans at MetLife Stadium and become part of Jets Nation.”

To prepare for auditions, the team is offering a series of prep classes that will be held at the Atlantic Health Jets Training Center in Florham Park, NJ. These classes are not mandatory but are designed to help candidates train for the auditions.

New this year, the team is introducing the Priority Boarding Program.  At each prep class, Garvey has the opportunity to a give a certificate to a dancer whose abilities have stood out throughout the class.  This certificate will allow the selected dancer to bypass the preliminary audition and go straight to the semifinal round.  For detailed information on the 2013 auditions and prep classes and to learn more about the Priority Boarding Program, visit www.newyorkjets.com/flightcrew.

About the Flight Crew Cheerleaders: The New York Jets Flight Crew was created in 2007 to enhance the overall fan experience by infusing additional energy and enthusiasm into each home game.  Members of the multi-talented, multi-purpose entertainment team are dancers, athletes and active participants in the Jets community.  Whether they are performing a choreographed dance routine or appearing at New York Jets charity events, all members of the New York Jets Flight Crew are committed to excellence and serving as role models for Jets fans across the globe. Follow the Flight Crew on Facebook at facebook.com/NewYorkJetsFlightCrew, on Twitter @JetsFlightCrew and on Instagram @jetsflightcrew.