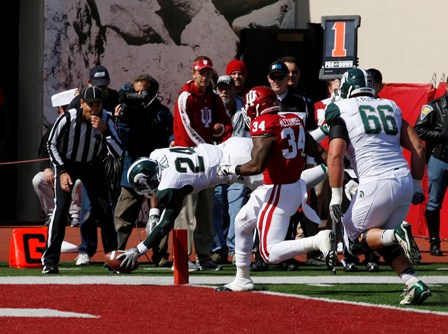 Even with the signing of free agent running back Mike Goodson the New York Jets might still be looking at a RB prospect in the upcoming draft.

Michigan State running back Le’Veon Bell (6’2”, 230) is scheduled for an official visit with the Jets and is considered a good fit for their new offense:

He rushed for 1,793 yards and 12 touchdowns as a junior and was named All-Big Ten Conference.

He averaged 4.7 yards per carry and caught 32 passes for 167 yards and a touchdown.

As a freshman, Bell rushed for 605 yards and eight touchdowns.

As a sophomore, Bell rushed for 948 yards and 13 touchdowns.

Bell has the versatility offensive coordinator Marty Mornhinweg desires in a running back as he can be a power rusher and catch the ball out of the backfield.

Currently projected as a third or fourth round selection the interest in Bell as a Jet should only grow stronger after his visit.