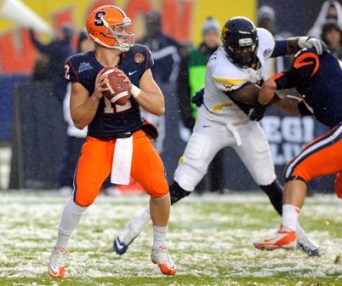 Highly touted University of Oregon defensive-end/outside linebacker Dion Jordan (6’6’, 248) is just one of many college prospects scheduled to make visit to Florham Park and the New York Jets before the draft.

Jordan is projected to be a top ten pick in this year’s draft and has the strength and speed to be a real impact player at the next level.  He had 23.5 tackles for a loss, along with 12.5 sacks over the last two seasons with the Ducks.

University of Syracuse quarterback Ryan Nassib (6’2”, 227, 10 1/8” hands) will also be paying gang green a visit.  Nassib finished his senior year completing 62.4% of his passes for 3,749 yards 26 touchdowns with 10 interceptions.  The overall quarterback draft class is hard to pinpoint so Nassib might be taken early or could be a second round option at #39 for the Jets.

The Darrelle Revis trade speculation is only fueled by the Jets next guest cornerback Dee Milliner (6’0”, 201) out of the University of Alabama.  Milliner is widely considered the best cornerback in this year’s draft and might be gone before the Jets first pick at #9.  He ran a 4.37 – 40 yard dash at the NFL combine and had 22 pass defenses along with 2 interceptions on the way to winning the National Championship with the Crimson Tide.  Milliner’s strength is man-on-man coverage and has good ball skills.  Regardless of Revis’ status Milliner would have to be considered by the Jets if available at #9.

Another quarterback prospect coming to Florham Park is Miami of Ohio’s Zac Dysert (6’3”, 231).  Finishing his four-year career with the Red-Hawks totaling a 63.8 completion percentage, 12,013 yards passing and 73 touchdowns, Dysert is a mid-level prospect who is seen as having great up-side potential.  He could be a later round developmental quarterback for the Jets.