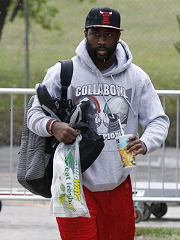 After months of speculation, the Darrelle Revis to Tampa Bay trade is official.  Earlier today Revis received a physical from the Bucs.  The NY Jets announced the move via their Twitter account.

The Jets now own the 9th pick and the 13th pick in the first round of the NFL draft.   If the Jets had lost Revis to free agency after this season they most likely would have received a 3rd round draft pick as compensation in the 2014 NFL draft.  This trade nets the Jets a 1st round pick in this draft.  The contract that Revis signed with the Bucs is something the Jets were not comfortable offering to a cornerback.

It’s official. @revis24 has signed. New 6 year contract with Tampa Bay which figures to pay him his $15-$16 mill per yr

This leaves little doubt that this is a full blown rebuilding of the roster under John Idzik.  It will also leave the Jets with a considerable amount of cap space going into 2014.