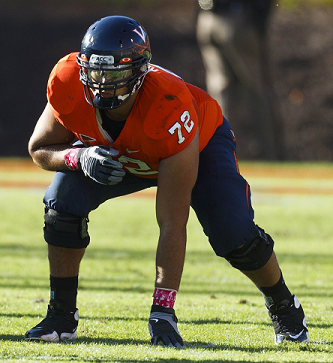 The NY Jets went back to an area in need of depth in the 5th round of the NFL draft, offensive line.   They selected Virginia left tackle Oday Aboushi.  The Jets have another Virginia left tackle on their roster in D’Brickashaw Fergsuon.  Although the expectations will be much lower for Aboushi and he projects to be a right tackle, or possibly even a guard in the NFL.

The 6’5″ 308lb Aboushi played for Xaverian high school in Brooklyn.  He was a team captain for Virginia in 2012 and an all ACC first team player.

STRENGTHS: Naturally large man with good overall weight distribution. Experienced at both left and right tackle. Shows at least adequate initial quickness off the snap. Gets a strong initial punch onto the defender and possesses the heavy hands to latch on and control his opponent. Extremely physical and aggressive player. Looks to dominate his target and will pancake or drive him deep downfield whenever he can. Rolls his hips into contact and keeps his legs churning to knock defenders off the ball. Good effort blocking at the second level. Solid week of practice at the Senior Bowl. Voted a team captain in 2012. Mentally tough individual, as demonstrated by the fact that he grew up a Muslim American in Brooklyn, NY.

WEAKNESSES: Relies more on his size and physicality to compensate for a lack of ideal athleticism. Lacks the light feet and balance to remain at left tackle in the NFL, struggling a bit with speed rushers and counter moves. Will over-compensate to the outside and leave open cut-back lanes between he and his guard. Will get fundamentally lazy, at times, leaning into his opponent and standing up rather than playing on the balls of his feet and with proper knee bend. Plays to and through the whistle, drawing needless penalties, at times. Less than ideal arm length for a potential tackle (32 and 7/8″) and has no experience playing inside over his career.

You can see the fan reaction to this move by checking our NY Jets draft thread in our forums.