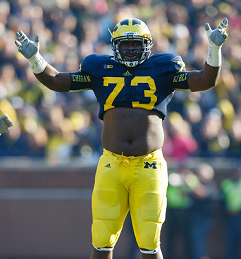 With the 178th overall pick (6th round) in the 2013 NFL draft, the New York Jets have selected William Campbell from Michigan.  The 6’5″ 310lb defensive tackle might actually not be a defensive tackle in the NFL.

Widely regarded as one of the top high school recruits four years ago, Campbell’s college career didn’t match the hype as he struggled to make much of an impact on the field.

After playing mostly on special teams and as a backup his first two seasons, he saw more action as a junior in 2011, but mostly as a reserve, recording 14 tackles, 2.5 tackles for loss and two sacks.

Strengths: Looks the part with a tall, well-built frame, broad shoulders and a large wingspan (80 inches). Can carry a lot of weight on his frame without losing his athleticism. Quick feet for his size with the agility to collapse inside and disrupt the pocket. Natural power to bully blockers at the point of attack, reset and redirect. Takes up room and has the size/strength combination to command double-teams.

Weaknesses: Built like an oak door, but too often that door is blown open as he struggles to anchor off the snap. Doesn’t appear to understand arm and hand technique, struggling to disengage blocks. Needs to improve his timing and motor; doesn’t appear to always play with a full tank. Below average career production with just 5.0 tackles for loss and 3.0 sacks.

There was immediate speculation on NFL Network that the Jets drafted Campbell with plans on converting him to the offensive line.