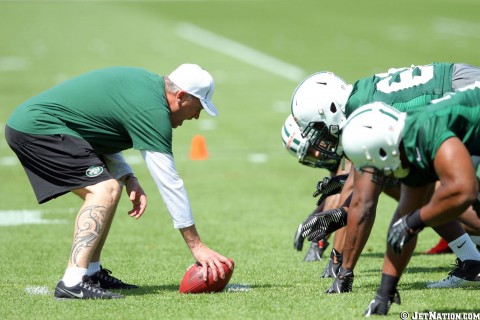 The Jets had another Organized Team Activity (practice) today which was open to the media.  Of course the quarterback competition took center stage as Mark Sanchez attempts to prove he should remain the starter while rookie Geno Smith tries to show offensive coordinator Marty Mornhinweg he’s the man to start.

By all accounts both quarterbacks had a productive day:

Sanchez says this has probably been one of his best offseasons, feeling comfortable in system, etc

With the Jets new offense a “work in progress” the skill position players (wide receivers, tight ends and running backs) need to step-up.

Receiver Stephen Hill, who had been sidelined by a lingering knee issue, appeared to be running at full speed yet still limited during practice and had a dropped pass which was an issue last season. Tight end Hayden Smith made a few impressive receptions while TE Jeff Cumberland was excused due to the birth of his new child (A JetNation Congratulations Jeff).  WR Jeremy Kerley looks like he’ll be a vital component in Mornhinweg’s short passing offense:

Nice sliding catch by Stephen Hill in the end zone, looks fine from my pov. Running at full speed. #nyj

Hill not getting a ton of reps. The Jets WR corps looks pretty thin at the moment. TE Hayden Smith might be having best day. #Jets

Hill just got an earful from Mornhinweg after dropping a pass. #nyj

Running back Mike Goodson returned to practice for the first time since being arrested and he, along with his lawyer, preferred to do his talking on the field:

Jets OTA open to the media today. Mike Goodson won't talk to the media, even about football, on the advice of his attorney. #NYJ

While Sanchez and Smith fight for the starting job another QB battle is brewing between Greg McElroy and Matt Simms for the number three position:

Simms is working with 3rd team, again. This could be bad news for McElroy. #nyj

Looks like the veteran guards are frontrunners right now as Willie Colon and Stephen Peterman take reps with the first string while Vladimir Ducasse runs with the twos: