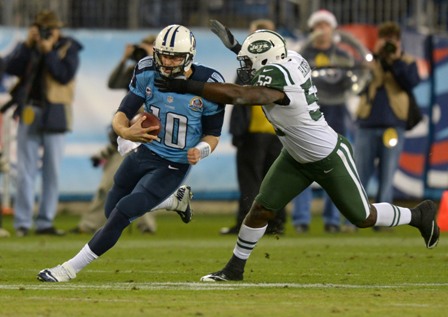 List of current NY Jets Linebackers on the roster:

With the loss of Bryan Thomas and the age factor setting in for Bart Scott, the Jets linebacking core needed an upgrade.  They needed to be faster, more athletic, and most importantly, they needed to get guys who can play sideline to sideline.  They also needed to add linebackers who have a knack for getting to the quarterback.  Calvin Pace was signed 4 years ago to do that and never quite became the pass rusher the Jets would’ve hoped (28 sacks 2008-12).

As a result, the Jets signed veteran LB Antwan Barnes, who played 3 seasons for the San Diego Chargers 2010-12 (started 2010 in Philadelphia).  During the three years in San Diego he accounted for 18.5 sacks in 38 games.  Barnes started his career with Rex Ryan’s defense in Baltimore so he has some experience at outside linebacker in the Jets defensive scheme.  His role will be simple:  Get to the quarterback and disrupt the pass game.

During his rookie season Quinton Coples played defensive end exclusively, leading the team in sacks (5.5), but will see time at outside linebacker during this upcoming year.  Likely to be used as a hybrid, part-time OLB part-time DE, better known as the LEO position Coples could find himself rushing the passer while standing up or even dropping into coverage, something he has not done.  The question is can Coples make the transition from being close to the line with his hand in the dirt to playing in space?

Veteran LB and the Jets defensive leader, David Harris has to have a dominant year.  Last year, Harris put on some weight and it affected his speed and ability to get to the point of attack.  This year, he has slimmed down to 250lbs and has been visibly quicker in OTA’s (granted without pads on).  The 2013 season for Harris could be a make or break season.  Due to count $13 million on this year’s salary cap, Harris can be released after this season for a minimal cap hit of $2 million dollars, saving the Jets about $5 million in cap space.  If he wants to remain with the team after 2013, he’s going to have to perform at a Pro Bowl-like level.

Second year LB Demario Davis will have an increased role in the Jets defense this year.  With Bart Scott no longer with the team, Davis will look to fill the void at inside LB.  Davis is very fast and explosive when he heads downfield.  ILB is the perfect position for Davis because he’s able to make plays in tight spaces.  He struggled a bit in his rookie campaign making plays in space, as most rookies do, but he will look to improve on that this year.  Rex Ryan is very high on Davis not only as a player but as a leader.  He understands the defense well and will be a major upgrade from the slow footed Bart Scott.

Three other players who will be competing for a position at linebacker are Garrett McIntyre, Josh Mauga and Ricky Sapp.  McIntyre stepped in for Calvin Pace and Bryan Thomas last year and showed his ability to get into the backfield and get to the quarterback.  Mauga was hurt most of 2012, but showed signs that he can play in 2011, palying in all 16 games and recording 25 tackles and 1 interception.  Mauga could be used as a cover LB in the pass game or a viable backup for the inside linebacker positions.  He’s been in Rex’s system 4 years now so he’s familiar with how to play the position.  Sapp has played in a few games for the Jets but never recorded a tackle.  All three guys, along with Calvin Pace (brought back on a 1-year deal) will compete for a position in camp.

Nick Bellore may not have a significant role on the defense this year, unless there’s some major injuries, however he is the leader of the special teams playing on most units and had 10  special teams tackles for the Jets last year.  Even if Bellore struggles in camp as a LB his ability to get down the field on the kickoff and punt teams will help him make the 2013 roster.

Other linebackers that will be fighting to make the team include:  Troy Davis, JoJo Dickson, Danny Lansanah, Sean Progar-Jackson and Jacquies Smith.  These players will have to show they can make an impact in preseason games, as well as, on special teams in order to make the final 53 man roster.

As Jet fans, one thing to look for out of the linebacking group this year is a dramatic change from methodical, and often slow footed linebackers, to more aggressive, faster linebackers.  The group that they have assembled could help the Jets return to being a top 5 defensive team in the league once again.