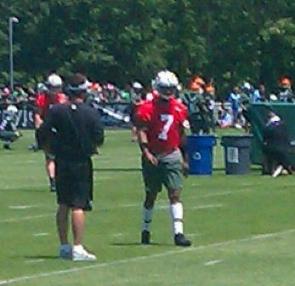 The New York Jets brought in some wide receivers for a workout yesterday.  Most notably former Cowboy/Jaguars WR Laurent Robinson and Colts WR Austin Collie but both receivers have a history of concussion issues which cause a significant loss in 2012 playing time. Neither Robinson nor Collie left the tryout with a contract.

With Santonio Holmes’ availability in question, as he still rehabilitates from a Lisfranc injury suffered last year, the Jets remain thin at the receiver position.

It appears that general manager John Idzik will have to continue to look at brining in depth.  Fan favorite former Jet Braylon Edwards and/or ex-Patriot Brandon Lloyd are often mentioned as possible candidates to get a tryout with the team but there has been no movement as of right now.

It has been reported that a larger than usual portion of rookie quarterback Geno Smith’s salary is tied to his participation in the offseason workout program.  This is so much beyond a non-story it shames me to even mention it but would like to explain why this means nothing.

Most teams offer a workout bonus as an incentive for players to come to voluntary activities.  Under the NFL’s rookie wage system a drafted player’s salary, is for the most part, already set in the four year contract they receive.  Smith has no guaranteed salary therefore it does not matter how it gets paid as long as he receives the full allotted amount allowed under the wage scale.

Workout bonuses count as salary, so say Smith is allotted a $1.25 million salary for 2015.  If he gets a $250,000 workout bonus he’ll get $1 million in base, paid throughout the season, salary so he will get paid the full amount.

The amount of the workout bonus is irrelevant and saying the Jets need to ensure Smith shows up for offseason workouts by insisting upon a high bonus is ridicules as well.  Smith should and will attend all voluntary workouts anyway, so he’ll receive his offseason bonus as long as he remains with the team.  What if the workout bonus was $50,000 would Smith just sit home and say, “I don’t need to workout for a lousy $50,000?”

Also the payment of a workout bonus are usually before or soon into the season while base salary is paid over the year broken into 17 week increments.  By taking a bigger bonus Smith receives a portion of his salary quicker than if he waited for the season payouts.