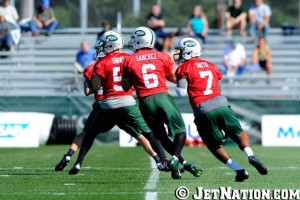 The Jets have completed their second practice and the good news is they will be in full pads on Sunday.  For the first two practices they were in shells, so there was no tackling.  As David Harris said, “We are going to see who’s real tomorrow.”  To recap the action for day two let’s start with the quarterbacks.  Long time JetNation friend Rich Cimini breaks down the passing stats.

The numbers don’t always tell the whole story, especially in practice.  Several reports said that Geno Smith looked good and had a long run on one play.  Again, when the players aren’t in full pads and there is no tackling it is hard to judge.

Clyde Gates had his second strong practice in a row.

Gates again. Wide open on a crossing route from Sanchez. Quick release off the line. #NYJ

Rex Ryan told the media that Kyle Wilson is versatile and is in the mix at Safety.  Antonio Allen intercepted Mark Sanchez during the 7 on 7 drill.  A lot has been made about Quinton Coples switching to linebacker.  Chris Lopresti from WFAN had this to say:

@walkdesign Coples? I've seen him with his hand in the ground much more than standing up through 2 days.

Recently signed Billy Cundiff did not have a good day, as he was 2 for 5 on field goals.  Nick Folk was 4 of 5.

Folk takes the early lead in kicking competition. Goes 4 for 5. Cundiff 2 for 5 #NYJ

Be sure to check out our New York Jets Photo Gallery which is being updated regularly.

Cut Down Day is Saturday

Impressions of Camp via Media Reports