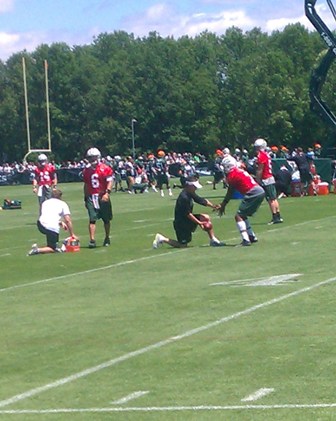 The Jets had training camp practice today on a rainy field up in Cortland.  Here are some of the day’s highlights:

The quarterback competition continues between Mark Sanchez and Geno Smith:

The 11-on-11 portion of practice consisted of a two-minute drill with Smith making the play of the day a 50-yard pass to rookie Ryan Spadola (Lehigh).

Ryan Spadola with an impressive diving catch near the end zone on a long toss from Geno Smith. #Jets

11-on-11: Defense blitzes on a screen play. Geno stays poised and dumps it over the defenders to RB John Griffin who sprints for 20 yards.

Sanchez did outplay Smith during team drills from within 10 yards and had a very solid practice overall.

In the inside the 10 drill they ran at the end, Sanchez looked better. Scored twice on three tries. #nyj

Looks like there is a long way still to go before a clear-cut frontrunner will emerge in this quarterback competition.

Recently signed rookie cornerback Dee Milliner, while still limited, saw time with the first team defense during drills and the 11-on-11 portion of practice.

Two-minute work late in practice. Milliner getting some reps here.

That was quick: Dee Milliner practicing in 11-on-11 team drills with first-team defense. #Jets

Milliner is participating in 7 on 7s #NYJ

Running back Chris Ivory attempted to return to practice yesterday after being sidelined with a hamstring injury but did not remain in long.  He was limited during today’s practice but did participate in drills.

Ivory is on the bike to start practice #NYJ

The Ivory injury is heightened by the fact that RB – Mike Goodson has not reported to training camp and it is unclear if he’ll ever show up.

Richardson on the bike. Jordan White on the side. Marcus Davis and Titus Ryan doing rehab. #nyj

Wide receivers Jordan White, Marcus Davis and Titus Young rehabbed off to the side with trainers not participating in practice. White has a history of injury issues starting last year and continuing into mini-camp this season. He needs to get on the field soon to make this roster.

Jets third round draft pick offensive lineman Brian Winters has been working with the first team offense since yesterday replacing veteran Stephen Peterman as he worked with trainers again today due to a shoulder injury.

Winters is at LG with first team #NYJ

Rookie safety Rontez Miles (California, PA) practiced for the first time today and has been removed from the physically unable to perform list (PUP). The Jets only have one active player (Santonio Holmes) who failed their pre-camp physical and has not been cleared to practice.

S Rontez Miles is on the field for the first time since training camp started. #Jets

Tight end Kellen Winslow Jr. is still on a “pitch count” as he worked along the sideline for about half the practice.