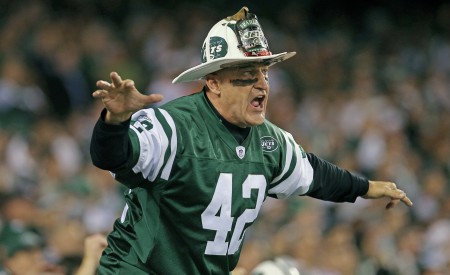 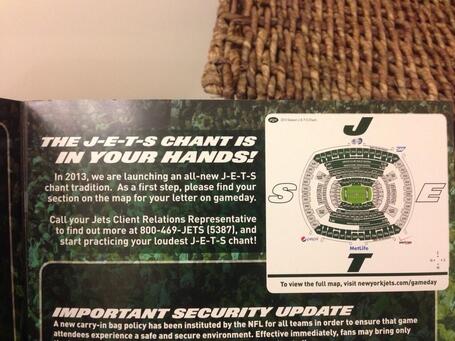 Last night I saw this tweet by The Jet Press.  The image says:

In 2013, we are launching an all-new J-E-T-S chant tradition.  As a first step, please find your section on the map for your letter on gameday.

Call your Jets Client Relations Representative to find out more at 800-469-JETS (5387), and start practicing your loudest J-E-T-S chant!

The part that confuses me is why I would need to practice the entire Jets chant if I am only assigned one letter on game day?  I got to my office early this morning and have been practicing.  Unfortunately though, my part of the chant only involves the letter S.  My co-workers are a little disturbed right now as I keep screaming S, then I wait 8 seconds and I scream S again.

There is no reason for this to change now.

I called the Jets to make sure this was true.  I spoke to Danny, who was very nice and helpful.  Danny did confirm that the Jets have changed the chant and he was prepared to help me figure out what letter I was assigned, in case I had a hard time reading the map.  I thanked him and told him I should be able to figure it out and that I would call back if I needed help.

If only they could have put out the map before I bought my PSLs.  I am now stuck with the letter S forever.

Fan reaction to the Jets decision to change the chant has been pretty unanimous from what I have seen so far.  It is pretty hard to get Jets fans to agree on anything, so that is a good indication of how silly this new idea is.  Had the Jets just let this play out, the chant would have survived.  If they go forward with this plan, not only will they not be starting a new tradition, they will be ending an old one.

To the suits at 1 Jets Drive in Florham Park, you should admit you were wrong and just move on.  The JETS chant was something unique that we had and you just turned it into the Wave.  Thanks, but no thanks.