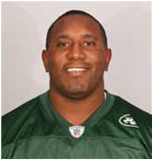 Former New York Jet Brandon Moore has decided to retire in Green and White despite some reports that he was possibly signing with the Dallas Cowboys. Coach Rex Ryan had nothing but good things to say about Moore and was clear when he said he “leaned on” Moore as a head coach and was a tremendous player.

Rex @ news conf on ex-Jet Brandon Moore's announced retirement: "What a tremendous player and a great person. He was just a great teammate."

In Moore’s 10-year career he started 142 games and was a key player in the success that the New York Jets had. Moore was also invited to the Pro Bowl in 2011.

In a recent interview with Brian Costello from the New York post Moore states, “I bleed green and white. I’m proud of that. I’m the biggest Jets fan there is and I’ll continue to be.”