Marty Lyons To The Ring Of Honor 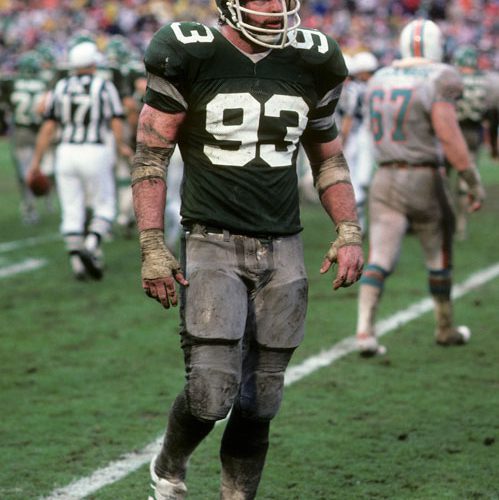 Lyons To Be Honored at October 13 Game

August 17, 2012 – The New York Jets have announced at MetLife Stadium and live on ESPN Radio Network that Marty Lyons will be inducted into the team’s Ring of Honor in 2013. The induction ceremony will take place during halftime of the October 13 game against the Pittsburgh Steelers at MetLife Stadium.

The team surprised Lyons by unveiling his new Ring of Honor status during the first quarter of tonight’s game. Lyons is the first Ring of Honor member to learn of his induction live along with the entire crowd at MetLife Stadium. Lyons acknowledged the cheering fans before returning to his broadcast duties.

Lyons, No. 93, was selected in the first round (14th overall) of the 1979 draft by the Jets out of Alabama and finished his final pro season in 1989, playing all 11 of his NFL seasons with the Jets. His standout college career earned him a place in the College Football Hall of Fame. A founding member of the “New York Sack Exchange,” he registered 29.0 career sacks after 1982 when they became an official statistic. He added six sacks in four different trips to the postseason.

For his commitment to the community, Lyons received the 1984 Walter Payton Man of the Year Award. He founded the Marty Lyons Foundation which grants wishes to children diagnosed with terminal or life-threatening illness and his foundation has effected more than 7,000 children. Due to his commitment to charity, the Jets present the annual Marty Lyons Award to the player that makes the biggest impact on his community.

Lyons has been an active member of the Jets family for more than 30 years and currently serves as the color analyst for the New York Jets Radio Network.

In 2010, the team created the Ring of Honor to celebrate Jets greats and commemorate their place in team history. The Ring of Honor inductees are selected by an internal committee led by Woody Johnson. Weeb Ewbank, Winston Hill, Joe Klecko, Curtis Martin, Don Maynard and Joe Namath were the inaugural 2010 class. Larry Grantham, Freeman McNeil, Gerry Philbin and Al Toon were inducted in 2011 and Mark Gastineau and Wesley Walker were inducted last year.

Fans not in attendance on October 13 can follow the coverage of the Ring of Honor ceremony online at newyorkjets.com.