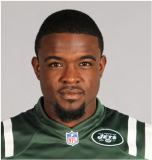 New York Jets running back Mike Goodson has served a four game suspension stemming from an arrested on drug possession and weapon charges in May.  The NFL has granted the Jets a roster exemption which runs until Tuesday, so while he can practice Goodson is not on the Jets active roster.

One of the team’s major offseason acquisitions Goodson signed a three-year $6.9 million deal but was absent from most of training camp due to a “personal matter” finally reporting to the team in late August.

Upon his return Goodson was suspended by the NFL four games during which time he could not practice with the team and agreed to a base salary pay-cut from $1 million to $715,000, forfeiting an additional $250,000 of that due to suspension and fines.

The last live NFL action he saw was on December 30th 2012 with the Oakland Raiders.  The Jets will have to decide if Goodson is ready to play in the team’s upcoming match-up on Monday night against the Atlanta Falcons.  Goodson will have to be moved off the exempt list onto the 53-man active roster if he is going to play meaning someone will be released once he is moved.  The Jets could wait until after Goodson’s roster exception expires to place him on the active roster but this would preclude him from playing on Monday.

Goodson said he’s been keeping in shape while away from the team and on suspension expressing a desire to have an immediate impact.  It will be up to the Jets coaches to determine whether activating Goodson or giving him an additional week of practice keeping the current roster for the Falcons game would be best for the team.