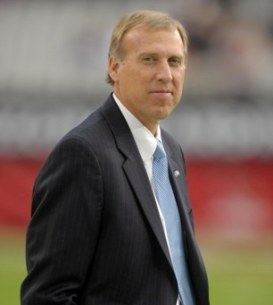 For some time the New York Jets have been perceived as a second rate organization which lacks the ability to handle the day-to-day issues which surround an NFL franchise. Last season the team couldn’t shake the “circus” moniker as they seemed to spiral out of control finishing 6-10, with critical comments from players about the team in the media and more questions than answers.

Enter new general manager John Idzik who brought a fresh professional approach with him. Idzik appears to have full control of the football operations from team building, to internal information and a uniform player policy regarding the media.

A comparison of the handling of difficult situations by the New York Jets and the Tampa Bay Buccaneers shows just how far the Jets have come as an organization:

The Buccaneers have been in the news quite often lately but for the wrong reasons.  Tampa Bay made one of the biggest moves of the offseason trading for cornerback Darrelle Revis giving him a $96 million contract but Revis has already criticized his coaches for their defensive schemes after playing in only two games.

The handling of former Buccaneers, now Minnesota Vikings, quarterback Josh Freeman turned into an all-out debacle.  Freeman was not only benched for rookie Mike Glennon but sat in a suite during a loss to the Arizona Cardinals because he was made inactive.

Confidential information about Freeman being admitted into the first stage of the NFL’s substance-abuse program was later “leaked” to the media.  The exposure of this private information forced Freeman to explain his enrollment:

In a statement released Monday night, Freeman said he has a prescription for Adderall to treat (Attention-Deficit Hyperactivity Disorder) ADHD; however, last year he accidentally took Ritalin, which triggered a positive test. As a result of the positive test he submitted to frequent drug screenings, leading to his placement in stage one of the league’s drug program.

“… [T]o assure everyone that the error was a one-time mistake, I agreed to be voluntarily tested in the ‘NFL Program,’ ” Freeman said in the statement.

Reports began to surface that Buccaneers head coach Greg Schiano was the person who leaked Freeman’s private information.  Although Schiano denies any involvement the NFL Players Association executive director DeMaurice Smith said the union would be investigating how this information was obtained.

Any learning disability, or any disability for that matter, should not be made public knowledge as it is supposed to remain confidential by federal law. The Freeman saga became an all out “circus” while making the Buccaneers organization look bad.

The Jets were faced with a difficult situation of their own when newly signed running back Mike Goodson didn’t report to training camp. Although many speculated where Goodson may be prior to returning to the team, receiving a 4-game suspension from the NFL, not a thing was said about where Goodson was during the absence.  They simple said it was a “private matter” and Goodson along with the team was ready to move forward.

General manager John Idzik deserves the utmost credit for the way he and the rest of the team handled the Goodson matter.  Both Idzik and head coach Rex Ryan wouldn’t comment on his whereabouts saying, “He’s away from the team right now.”  They were stern with the media and still to this day have never said anything further about the situation.

It should make fans proud that this organization is heading in the right direction while others have taken over for what the Jets were perceived to be.  John Idzik deserves praise for protecting a player’s privacy something the Tampa Bay Buccaneers simple did not do.

So far John Izdik’s impact upon the New York Jets organization has been a positive one as this team moves towards becoming more respected around the league.  The way the Goodson situation was handled showed Idzik is a class act and has the leadership abilities to build a quality team we can be proud of on and off the field.