The Jets went into Buffalo following the bye week and it appeared as though no one told the players. The Jets came out flat and played poorly in virtually every facet of the game. The defensive line lacked the pressure that they have been getting for the past nine games, the linebackers played poorly, and the secondary was beat deep several times. After hearing this one would think that this is the reason why the Jets lost. However, a combination of the poor defensive play and Geno Smith and the offense struggling all day in the windy, cold conditions at Ralph Wilson Stadium were the main culprits.

Using the All-22 package from NFL Game Rewind, the following is a dissection of all 4 turnovers that the offense (Geno Smith) committed and what he was looking at pre-snap versus what the defense did after the snap to confuse the rookie all game long. My apologies for not using the Coaches’ Film, but it is not available until after tonight’s game as a NFL.com website rule. 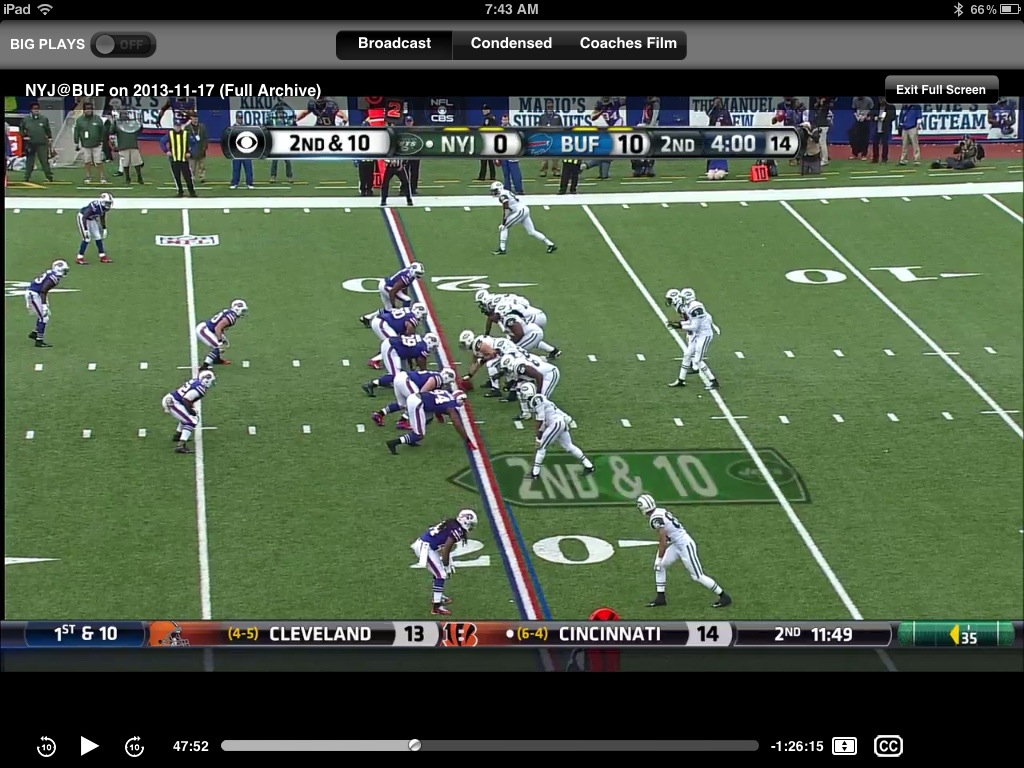 Geno Smith should see that he has his checkdown, Bilal Powell out of the backfield to dump the ball to quickly with the rush in his face. He stares down his receiver rather than follow the progression and make a smart decision. 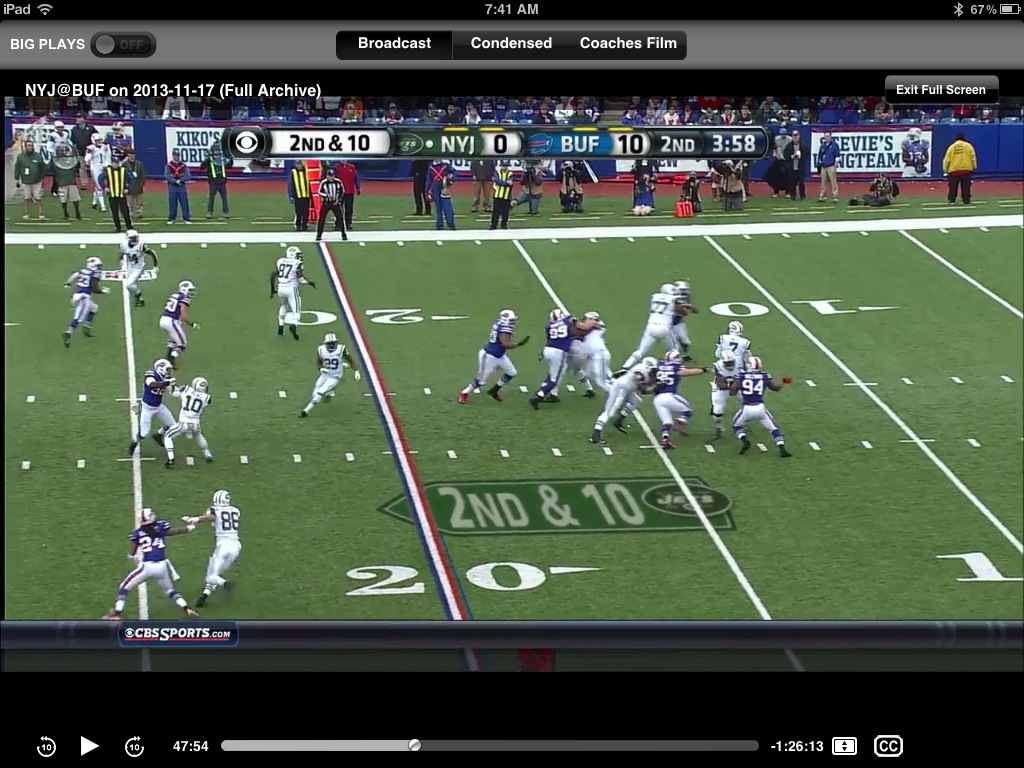 Due to the lack of a quick decision and the fact that Brian Winters got blown off the ball by Kyle Williams(#95), Smith fumbled, setting up a second touchdown for the Bills within a minute. 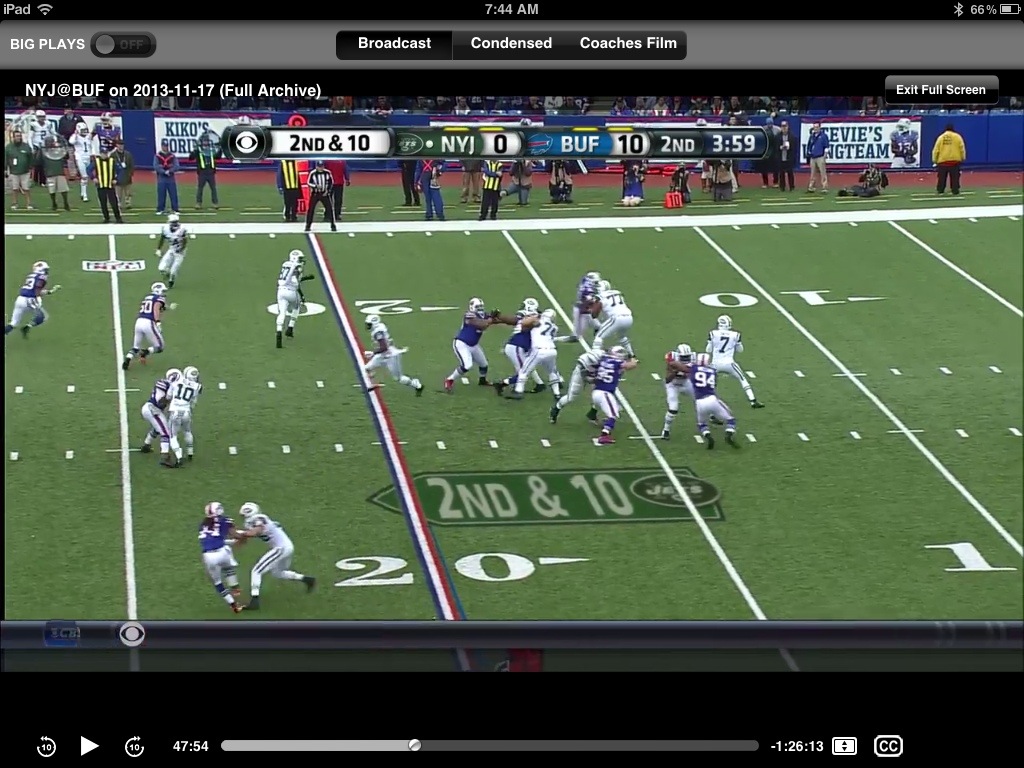 Smith’s pre-snap read should see off coverage, probably a zone coverage. This coverage looks to be quarters coverage, meaning each defensive back covers their own quarter of the field. The open areas in this zone are right behind linebacker depth. 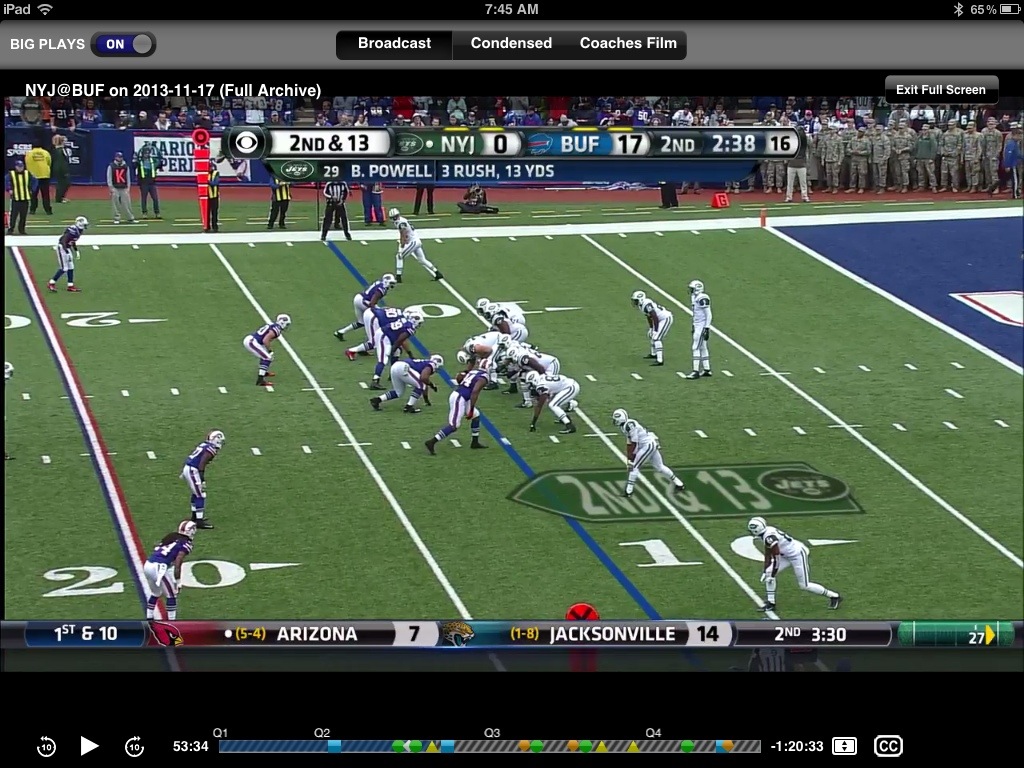 MLB Kiko Alonso blitzes on the play, meaning the entire middle of the field is open for crossing routes. David Nelson is running a quick slant and has separation from the defensive back trailing him. Smith keyed in on TE Jeff Cumberland who, like the other two WRs for the Jets was clearing out for the underneath route run by Nelson. Smith tried to force the throw in to Cumberland and was intercepted by the left deep quarter defender who happened to be Jairus Byrd, who was sitting in his zone reading Smith’s eyes. Below is a picture of the WR’s and TE clearing the path for Nelson underneath. 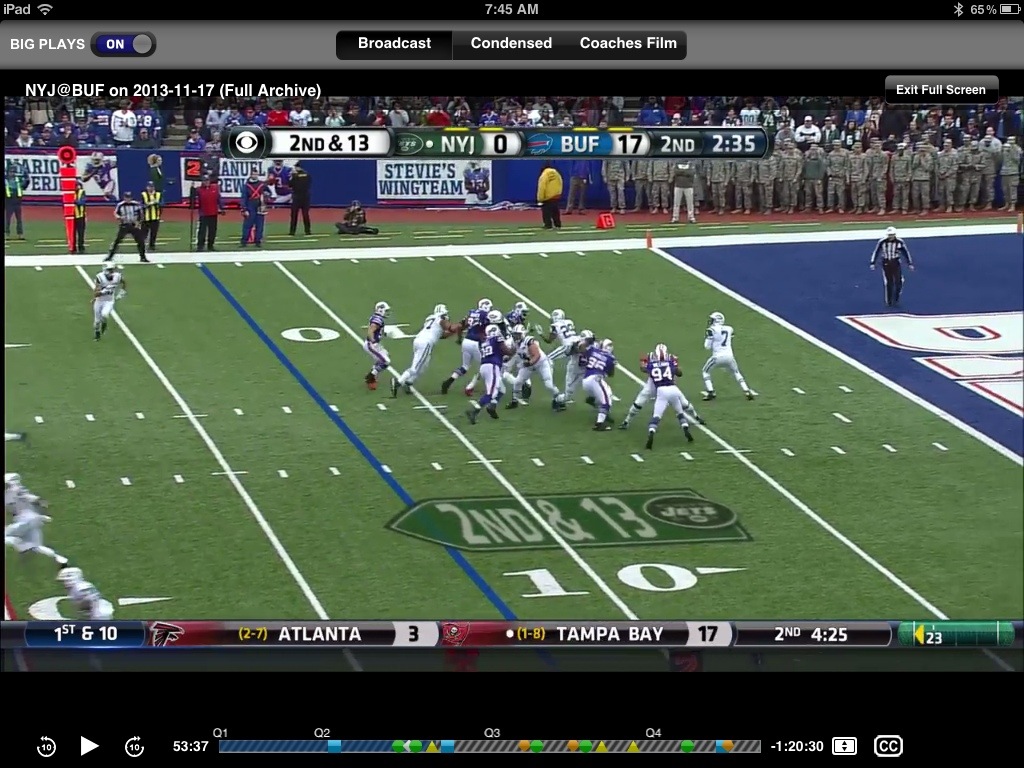 This interception happened in the third quarter when Smith tried to, once again, force a throw into a receiver. This time it was Santonio Holmes on a dig route (deep in). This time the corners are in man to man coverage. The way you could tell is when Stephen Hill goes in motion #37 Robey follows him across the formation. 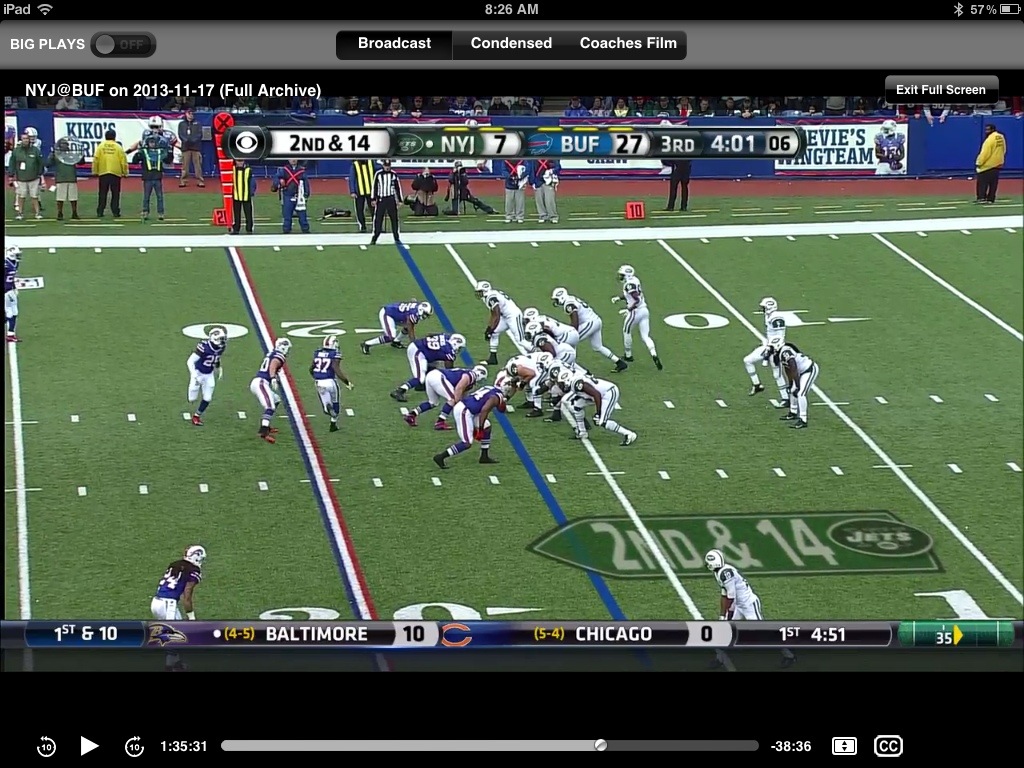 There weren’t many options for Geno Smith on this play, however, he had two short options(Ivory and Cumberland) to take and decided to try and fit it into a tight window. Once again, Jairus Byrd was reading Smith’s eyes and made a great break on the football. 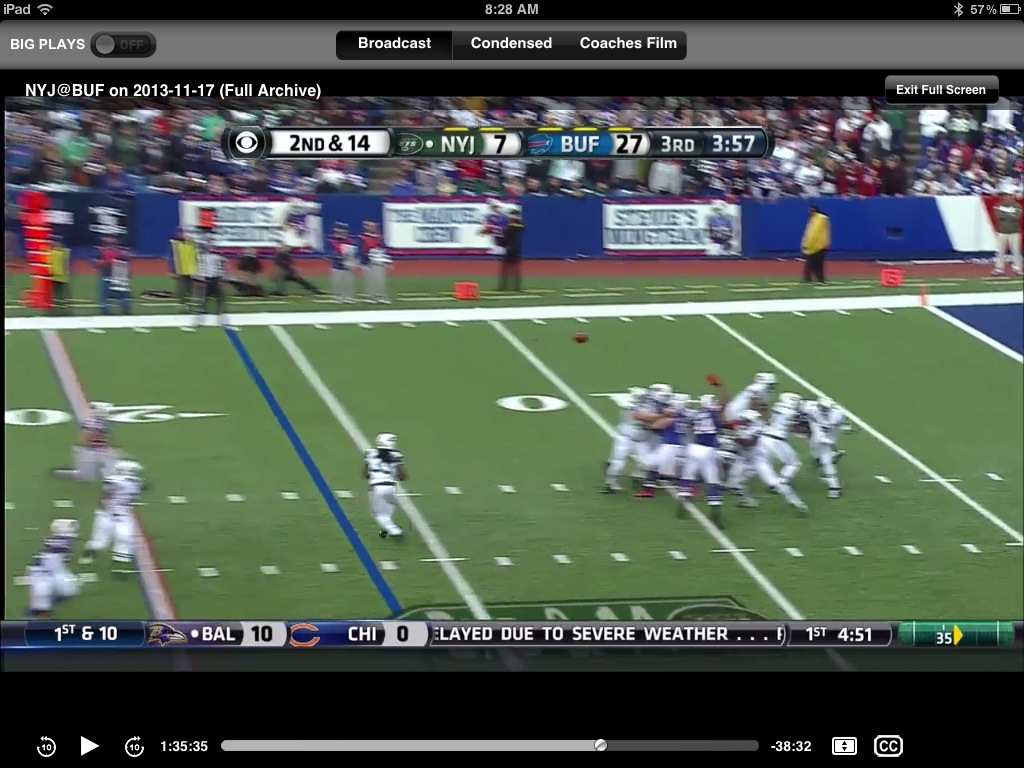 The result was Byrd stepping in front of Holmes and making his second interception of the game. 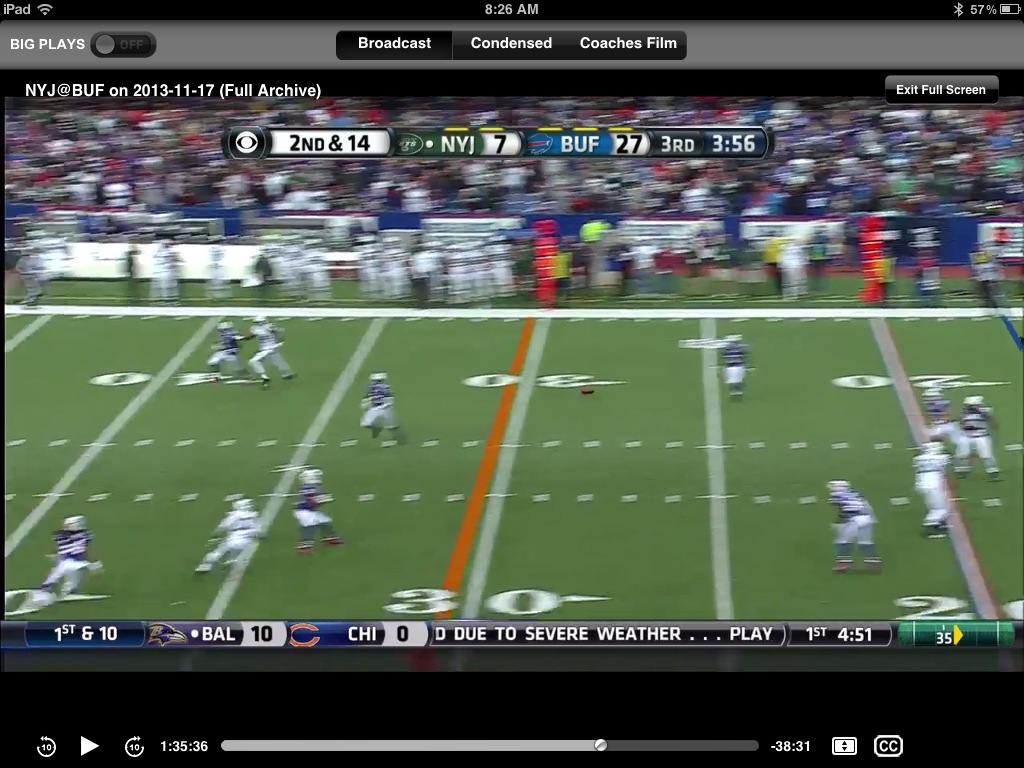 This interception was the worst of all 4 turnovers. The Bills tricked Smith into thinking #25 Searcy was going to blitz off the edge as they had been doing all game. Instead, Searcy reads Smith’s eyes, recognizes it’s a screen pass and jumps the route, returning it for a touchdown. Here is what Geno Smith saw presnap: 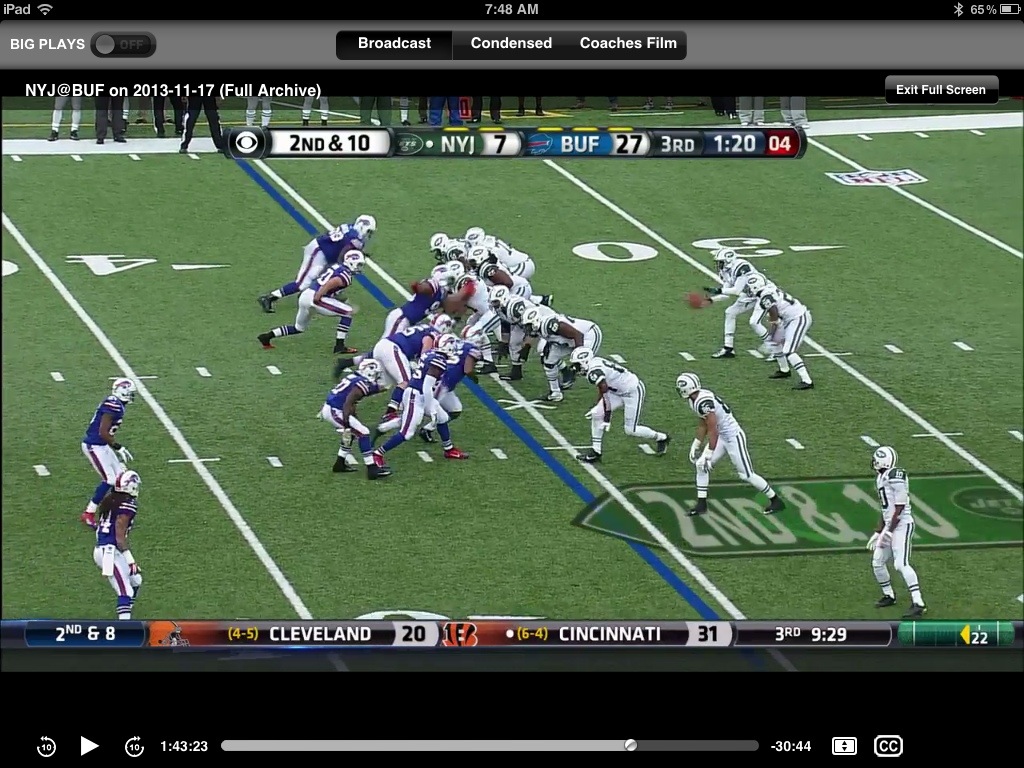 Searcy bailed out of the blitz and stared at Smith until he threw the ball. This play didn’t stand a chance of success. 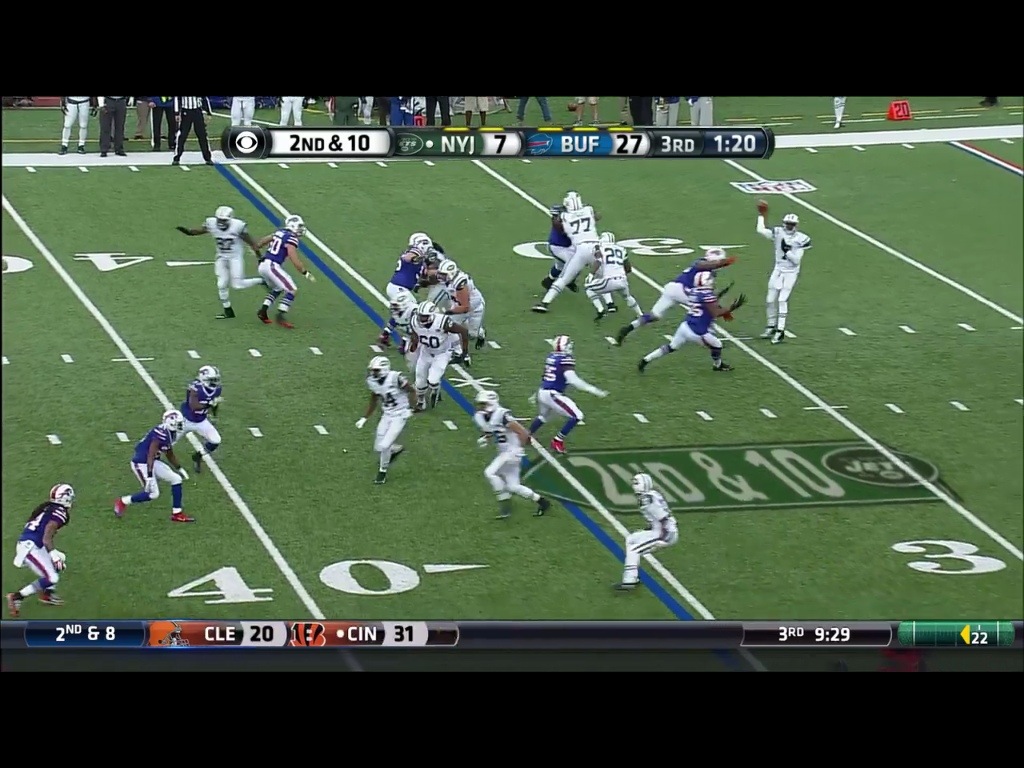 One other issue with this play is that the offensive line sold out on the screen way too soon. A lineman is supposed to hold their block for at least one second then let their guy go and block for the screen. The entire line left way too early, and Smith had no time to even see Searcy floating by the line of scrimmage. This picture is right after the snap by Mangold. Take a look at how far upfield the defensive linemen are before Geno even throws the ball. 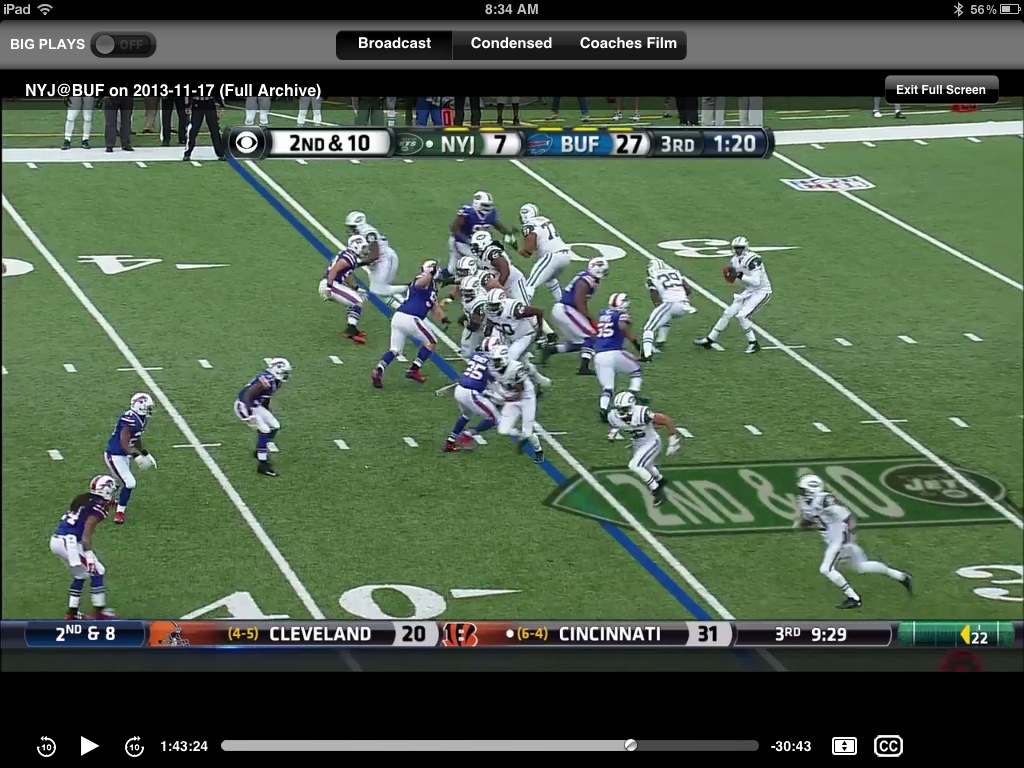 Overall, a terrible day for the Jets and rookie Geno Smith. He needs to show improvement or the Jets will be looking for an alternative in the 2014 NFL Draft to compete for next year’s starting position. He will face a tough task of the Ravens in Baltimore this weekend. It’ll be interesting to see how the Jets prepare him for it.