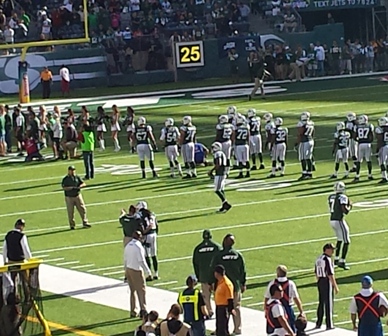 There’s officially only two games of the New York Jets season left. With so much talk of what’s going to happen once the season ends, it’s easy to forget the Jets and Browns will square off at 1 p.m. for the final home game of the season. While there’s no more chance at the playoffs, there is a lot on the line in other areas. Can Geno Smith finish strong and assert himself as the quarterback of the future? Is Rex Ryan coaching for his job? How will the final two games effect the draft position? Let’s dive in to this weeks matchup:

Most teams are led on offense by a star quarterback or running back. This is not the case for the Browns, who have seemed to whiff on second year quarterback Brandon Weeden and traded second year running back Trent Richardson. Instead, the Browns are led by wide receiver Josh Gordon, the second year wide out who is dominating the NFL. Despite missing the first two games because of a suspension, Gordon has 75 receptions, 1,467 yards, and nine touchdowns. With the way the secondary has performed, the Jets may need to triple team Gordon to stop him.

Outside of Gordon there is not a lot to be afraid of on the Browns. Willis McGahee is the teams leading back but is averaging under three yards per carry. Jason Campbell is the teams starting quarterback and isn’t doing anything spectacular but also isn’t making many mistakes. His completion percentage of 58 is good and he has a 2-1 touchdown to turnover ratio. He is going to miss his big tight end target Jordan Cameron, who will be out with a concussion.

The Cleveland defense is full of young talent that is starting to fulfill its promise. The Browns tough front seven anchors the eighth overall defense, led by one of the more underrated nose tackles in the league in Phil Taylor. Behind him is middle linebacker D’Qwell Jackson, who leads the team with 121 tackles on the year. The Browns also have three very good pass rushers. Veteran Paul Kruger came to Cleveland this past offseason as a free agent and has 4.5 sacks on the year. Jabaal Sheard and Barkevious Mingo also have 5.5 and 5 sacks respectively. The rotation those three have keeps the pass rushers fresh and is tough on an offensive lineman.

The Jets would catch a break if Joe Haden didn’t play Sunday (he is questionable with a hip injury). Haden is one of the best cover guys in the league and is a playmaker, with four interceptions and 18 passes defended on the year. The Browns also have two very good safeties. T.J. Ward plays very well in the box and is known as one of the best run stoppers in the league. Free safety Tashaun Gipson has four interceptions on the year.

As I stated in the intro, this is still a crucial game for the Jets going forward. Jobs are on the line all over the place. The Jets have to continue to see what they have in Geno Smith. I’m not saying they should completely abandon the run, because Chris Ivory and the offensive line seems to be hitting stride, but the gameplan this week will hopefully let Smith make more “big boy” throws. I expect Mornhinweg and company to try and get Jeremy Kerley involved early and often with some quick routes.

The defense has one really, nearly impossible job: stop Josh Gordon. I’m sure Antonio Cromartie will see a lot of time on Gordon, but hopefully the Jets are wise enough to always have safety help over the top. With no Jordan Cameron, the Jets can focus on Gordon and take their chances one-on-one with Greg Little or Davon Bess.

This will be an interesting game. The Browns, at least in my eyes, are just a slightly better version of the Jets. This is definitely a winnable game, but the Jets are going to need to have some big plays through the air and avoid the big mistake elsewhere. There are some fans who wouldn’t mind seeing the Jets lose their last two to get a better draft pick. I’m generally not a proponent of losing because losing sucks, but if that’s what you root for then good for you I guess. Either way, with just two games left, try and enjoy a nice Sunday of football.