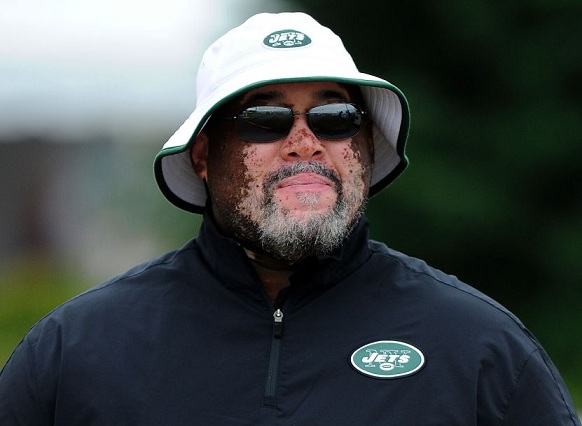 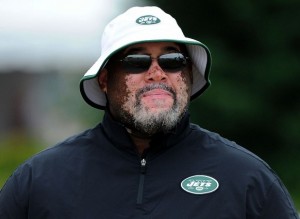 Woody Johnson and John Idzik informed the team that Rex Ryan will be back as the head coach of the New York Jets next season.  It remains to be seen if they will extend his contract or play out the last year of Ryan’s current deal (which is hardly ever done in the NFL).  It all remains a possibility,  but one thing is for certain, the players rallied behind Ryan these last two games.  Next season there will be players gone, new players coming in, but the first question the front office needs to address is: Who’s going to stay or go on Rex Ryan’s coaching staff?  Below are the main position coaches and coordinators and who should be kept and who should be let go prior to the draft process this year.

Mornhinweg was able to build an offense around a rookie quarterback, with minimal skill at the wide receiver and tight end positions.  Even though the offense didn’t carry out the game plan as well as he and Rex Ryan would’ve hoped, he was creative in his gameplans and in his reads for the young quarterback.  He tailored this offense to the players he had, which is what all coordinators are supposed to be able to do.  His relationship with Rex was very professional and they respect each other.

Lynn just finished his 5th year as a Jets coach and his running backs had a phenomenal season.  The addition of Chris Ivory to complement the shifty Bilal Powell made the Jets backfield one of the toughest groups to bring down after first contact.  As a team they rushed for over 2100 yards, led by Chris Ivory’s 833 yards.  To continue the progress of Bilal Powell and Ivory, in addition to Tommy Bohanon, Lynn should be here in 2014

Lal just completed his second year with the Jets.  The Jets were 31st in the league in passing offense.  Granted, the Jets lacked the skill players to help the rookie quarterback be successful, but Lal should be criticized for not developing guys like Stephen Hill.  It is safe to say that Hill isn’t what the Jets hoped that he would be, and there was a carousel of receivers brought in throughout the year that played at some point for the Jets.  Lal previously coached in Oakland where he had a similar issue with Darius Heyward-Bey who never became the speedy deep threat he shoud’ve become.  The Jets always had reliable, quality receivers and under Lal you could probably count on one hand how many successful receivers that Jets have had.  It is time for the Jets to move on from Sanjay Lal

Devlin did an outstanding job of making this group of players better as the season went on.  There were some rough times for this group in the middle of the year, but Devlin made adjustments and the line bonded together and played well down the stretch.  The Jets were 6th in the league in sacks given up with 47, but gave up only 5 sacks in the last four weeks and zero in the last two games.  Those statistics, with two new guards, one being a rookie should improve next year.  Keep in mind that Austin Howard and Willie Colon are both free agents, that could throw a wrinkle in the Jets offensive line plans for next year.

Lee and Mornhinweg did a tremendous job of teaching Geno Smith how to be an NFL quarterback. Lee was able to break Smith down and build him back up.  He showed Smith the way he felt he would be most successful and Smith responded by doing what his coached asked.  Lee is known around the league as one of the most intelligent quarterback minds around and he will only continue to help the career of Smith.  The Jets have to consider that a change at this position will cause unfamiliarity for Smith and he’d have to build a whole new relationship with another coach.  This usually doesn’t bode well for young quarterbacks so it would be wise for Lee to stay.

There has been talk that John Idzik wants to make changes to Rex Ryan’s defensive staff.  The first name you hear is Dennis Thurman.  Thurman just completed his first year as the Jets Defensive Coordinator after coaching the secondary for 4 years.  He has worked for Rex since they were together on the Ravens staff from 2002-2007.  The Jets defense was ranked 11th overall this year, 2nd against the run.  They have put together one of the toughest front 7 in the NFL.  Thurman deserves another year as the defensive coordinator.  After all, doesn’t every Jet fan know who REALLY calls the defense?

What can you say about Coach Dunbar.  The guy is respected around the league as the top defensive line coach.  Since Dunbar came to New York prior to the 2012 season, the Jets DL has been their most consistent position on the team.  Dunbar has created Pro Bowl caliber players, in Muhammad Wilkerson, Sheldon Richardson, and Damon Harrison.  In addition, he used guys like Leger Douzable and Kenrick Ellis to compliment the three headed monster up front.  The Jets had 40 sacks as a team this year, a dramatic improvement from 2012.  Dunbar will be wanted around the NFL so it is crucial that the Jets do everything they can to keep him as a member of this staff.

VanGorder has left the New York Jets to take the Defensive Coordinator position at Notre Dame.  VanGorder was key to the rebirth of David Harris this year as an ILB.  Harris and Davis led the team in tackles this year and Quinton Coples became the player every fan hoped he would down the stretch of the season.  Calvin Pace had 10 sacks this year after being cut and resigned by the Jets.  Antwan Barnes, prior to getting hurt had 2 sacks.  VanGorder changed the culture of the Jets linebacker group and he will definitely be missed by this staff.  Best of luck at Notre Dame as their Defensive Coordinator.

McDonald just completed his first year as DB coach for the Jets.  The defensive backs struggled this year.  Most fans knew with the departure of Darrelle Revis that the Jets would falter a bit, but the poor play by Antonio Cromartie coupled with the roller coaster ride of rookie Dee Milliner was not expected from the beginning.  Milliner did improve as the season went on and Cromartie was battling an ailing hip injury all year, but this position needs to improve.  Dawan Landry didn’t play up to par with what his brother Laron was able to accomplish last year.  The midseason addition of Ed Reed at first seemed like a huge mistake, but he ended the year with 3 INTs in three weeks and also played the part of mentor for rookie Dee Milliner.  There’s no coincedence that when Reed came to the Jets Milliner’s game improved.  However, with the addition of Reed, Antonio Allen’s playing time decreased and thus hindered his progress.  Josh Bush hardly ever saw the field as a 2nd year player.  Allen showed moments of progress when he was able to create pressure blitzing and also have an interception that led to the Jets beating the Patriots earlier in the year.  As a whole this group struggled this year and unfortunately, McDonald isn’t the answer

The Jets struggled on Special Teams this year, with the exception of Nick Folk.  Kotwica had a rough first year as the Special Teams coach, taking over for Mike Westhoff.  The Jets didn’t scare anyone in the kick return or punt return game until Josh Cribbs came to the team.  Once Cribbs got hurt the Jets had a “plug-and-play” group of guys they auctioned for the position, none of which were successful.  Kotwica has been interviewing for college jobs, most recently the Army Head Coach job, so it’s unclear what his vision is.

Tell us what changes to the staff you think Rex Ryan and John Idzik should make in our NY Jets forum.