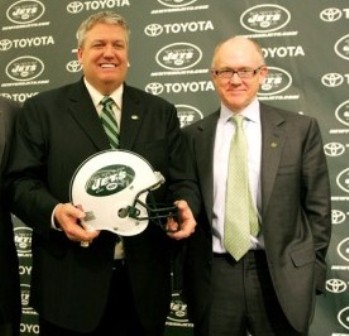 Per Adam Schafter of ESPN the New York Jets and head coach Rex Ryan have agreed on a multi-year contract extension:

Jets and head coach Rex Ryan have reached agreement on a multi-year extension, according to team and league sources.

After Jets owner Woody Johnson and general manager John Idzik announced that Rex Ryan would be remaining as head coach into the 2014 season speculation arose that the team would offer a one year extension to Ryan’s current contract set to expire in 2014.

General Manager John Idzik refused to elaborate on a potential Ryan extension during an end of the year press conference a few weeks ago simple saying the organization does not publicly discuss contract matters. By giving Ryan a multi-year deal the question of his “lame-duck” status as a coach is now eliminated as a one year extension would have been a nominal show of support from the organization.