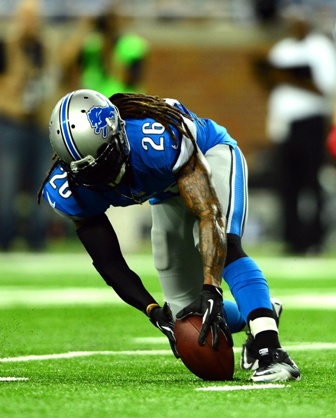 Now that the Super Bowl has ended it is time to focus on the potential offseason moves for the New York Jets. An area of concern is at safety with only five interceptions produced by the position all season with the defense ranking 22nd against the pass.

In an attempt to strengthen the group veteran safety Ed Reed was acquired late during the year. Even having three interceptions in limited games Reed at 35 still seems to have lost a step and is not seen as a long term answer.

With the Jets having resources to go after pending free agents names of prominent safeties such as the Buffalo Bills Jairus Byrd and Cleveland Browns T.J. Ward have been discussed as possible free agent signings. Unfortunately these players are more likely to either be franchise tagged or sign long term deals with their current teams then become available on the open market.

One player who could end up on the Jets radar is the Detroit Lions safety Louis Delmas. Currently still under contract Delmas could easily become available as he carries a 2014 six million dollar salary for the cap strapped Lions who might be forced to release him.

Delmas entering his sixth NFL season will be turning 27 in April. He had a career year with Detroit in 2013 having 64 tackles, 8 pass defenses, 3 interceptions and 2 sacks. There is some history of injury with Delmas, which does offer concern, but he played all 16 games last season and if available could bring the Jets a versatile safety with good range at a reasonable salary.

Obviously the Lions will need to release Delmas before any talk of him coming to the Jets becomes realistic but the chances are strong that this player will be available and general manager John Idzik would be wise to take a good look at signing him.

By Dennis Agapito
Posted on February 3, 2014