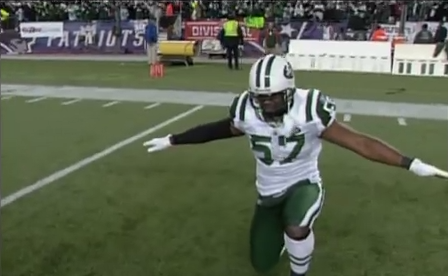 Bart Scott will be joining CBS as part of their NFL Today pregame show.  Tony Gonzalez will also join the CBS team along with James Brown, Bill Cowher and Boomer Esiason.  Having two ex-Jets on the pregame show should make it interesting.

“Bart joining The NFL Today is a natural progression from his outstanding work during his first season on TOPS,” CBS Sports Chairman Sean McManus said in a statement. “Bart brings a dynamic personality and unique perspective as a recently retired player providing strong opinions on all the hot-button issues on a weekly basis. We are confident he will continue to bring that perspective and those opinions to The NFL Today.”

Jets fans know that Bart Scott isn’t afraid of making big statements.  Many fans on the national level were first introduced to Bart Scott when he gave his, “Can’t Wait” interview on ESPN.

You can read more about Bart Scott in the JetNation forums.